Democratic presidential candidate Hillary Clinton addresses supporters at an organizational rally on at the home of Nancy and Danny Emanuel on July 7, 2015 in Ottumwa, Iowa.
David Greedy—2015 Getty Images
By Sam Frizell

The American Federation of Teachers, a powerful, 1.6 million-strong national union, voted on Saturday to endorse the former secretary of state, calling Clinton a “champion” for “working families.”

“Hillary Clinton, a product of public schools herself, believes in the promise of public education,” said Randi Weingarten, the president of the AFT. “From early childhood learning through higher education, she sees how that promise can create real opportunity for kids, building a much-needed bridge to the middle class.”

The endorsement from the AFT does not come as a surprise. Clinton speaks often on the campaign trail about early childhood education, particularly on the importance of speaking and singing to young children, and has called for universal pre-kindergarten. She’s also endorsed President Obama’s plan to make community colleges free, and introduced a proposal to prevent for-profit colleges from fleecing veterans.

Weingarten is also a long time ally and friend of Clinton’s.

Nonetheless, it’s an important first union endorsement for Clinton, who is still struggling to establish herself as the favored candidate of the Democratic base.

The AFT’s endorsement is a major strategic advantage for Clinton, too. The AFT says it will make 1 million phone calls and knock on more than 500,000 doors in the run-up to the 2016 election.

In many ways, Clinton’s competitor for the Democratic nomination, Vermont Senator Bernie Sanders, can claim a more natural alliance with the unions considering his staunch union activism and socialist roots. The AFL-CIO, the biggest alliance of unions in the country with 16 million members, has not yet endorsed a candidate for president. Many members and local affiliates say they identify most with Sanders, but that may not sway the union either way.

“I’m honored to have the support of AFT’s members and leaders, and proud to stand with them to unleash the potential of every American,” Clinton said in a statement after the endorsement. “Their voices and the voices of all workers are essential to this country.” 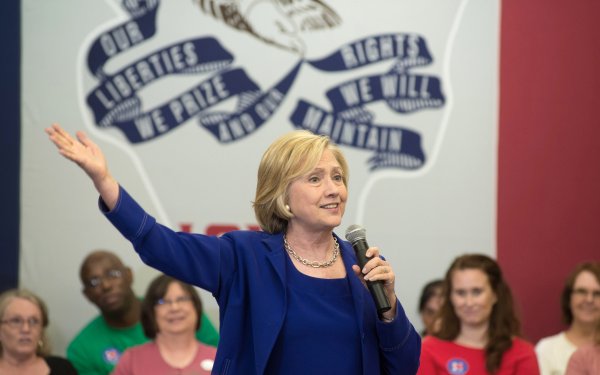 It's the Economy, Hillary
Next Up: Editor's Pick