Bolivian President Evo Morales gave Pope Francis a crucifix Thursday displaying Jesus nailed to a hammer and sickle. The Pontiff examined the gift politely, and then handed it back to a Bolivian political aide, the Guardian reports.

The hammer and sickle is a prominent symbol in Marxism, an atheist political ideology. While this particular crucifix was designed by an activist Jesuit, the Guardian reports that some conservative Catholics have taken offense to the gift, calling the move manipulative. When asked, a Vatican spokesman dismissed the idea of any controversy, saying, “The Pope has had no particular reaction to this.”

Morales also gave the Pontiff a necklace bearing the same symbol, according to the Italian news agency Rome Reports, which specializes in papal and Vatican news. 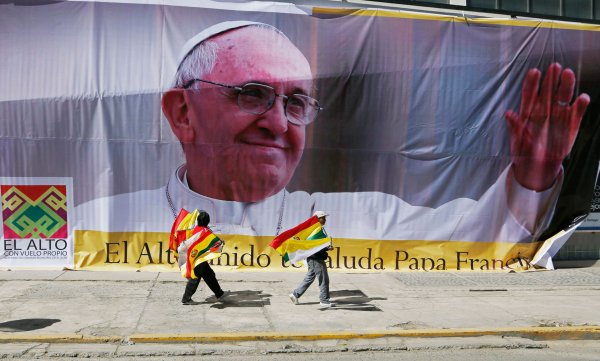 Bienvenido Francisco! Scenes from the Pope's Visit to Latin America
Next Up: Editor's Pick