Here's a First Look at the Sherlock Victorian Christmas Special

Showrunner Steven Moffat was met with cheers when he promised Sherlock fans that they would be returning to 221B Baker Street this Christmas and premiered the first footage from the special Victorian episode of the show at San Diego Comic-Con on Thursday.

The special will play in select movie theaters in the U.S. this December, Moffat revealed

The self-aware clip—which played after cast members like Benedict Cumberbatch apologized in a video for not being able to make the convention—acknowledged Cumberbatch and Martin Freeman’s long absence from the small screen. (The last episode of season three aired in January 2014.)

Cumberbatch’s Sherlock Holmes quips, “I hardly knew myself [when I would come home], Mrs. Watson. That’s the trouble with dismembered country squires, they are notoriously difficult to schedule.”

The trailer earned laughs with its conclusion: “Coming soon…ish.” The episode will also be shown on British television over the Christmas season.

Though Sherlock is based on Sir Arthur Conan Doyle’s stories, the first 10 episodes of the show have been set in modern times. The new Christmas episode, however, will take place in the “proper” Victorian era, with a few adjustments—female characters like Mrs. Hudson, for instance, will get more lines (as indicated in the Watson and Mrs. Hudson’s debate over gender politics in the trailer). The creators were so enamored with the new setting, in fact, they briefly considered continuing the show as a period piece. “It’s one of the best ones we’ve made,” Moffat said.

Moffat also remained tight-lipped about other aspects of the show, like whether audiences will see femme fatale Irene Adler — aka “The Woman” — again or whether a third Holmes brother will appear.

He did admit (to the dismay of many fans) that he has not yet started writing season four of the show, which is scheduled to premiere in 2016. But he has sketched out the story that will “suckerpunch you into emotional devastation.” And he said he knows how the series will conclude.

Oh, and sorry Doctor Who fans, but Moffatt—who also runs that show—says there are no plans for a crossover. 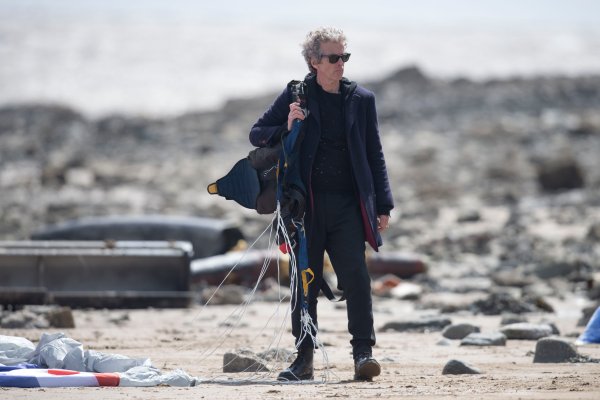 Watch the Dark New Trailer for Doctor Who Season 9
Next Up: Editor's Pick