How Jane Goodall Made a Scientific Breakthrough Without a College Degree

When Jane Goodall arrived at Tanzania’s Gombe National Park on this day, July 14, in 1960, she was not, strictly speaking, a scientist. The anthropologist Louis Leakey had sent her there to study the social lives of chimpanzees, largely on the strength of Goodall’s passion and curiosity about the animals. But she lacked a college degree, and she took a decidedly unscientific approach to her research. Instead of assigning numbers to the chimps she observed, she named them: Fifi, Freud and Frodo in one family; Goblin, Gremlin and Glitter in another.

It was the fulfillment of Goodall’s dream, from age 8, to “to go live in Africa, spend time with animals, and write books about them,” according to a later TIME story about her. But there was nothing childish about the way she carried out her work. In the first year of a study that would ultimately span decades, she made the groundbreaking discovery that chimps made and used tools, which until that moment had been viewed as an exclusively human ability.

The anthropology community was stunned by Goodall’s finding that, “like men,” as TIME put it, “chimpanzees are technological animals.” They chewed leaves to make sponges and sopped water out of hollow branches. They stripped grass stems to use as probes for digging termites out of their mounds. Leakey summarized the significance of Goodall’s discovery: “Now we must redefine ‘tool,’ redefine ‘man,’ or accept chimpanzees as humans.”

Goodall (who eventually earned a PhD in ethology at Cambridge University, where she was one of the few to do so without first earning a bachelor’s degree, per PBS) also stunned her fellow anthropologists and ethologists with the finding that chimps lived complex emotional lives within highly sophisticated social structures. As TIME explained in 1971:

And while Goodall preferred to spend her time in the company of chimps, her efforts to protect their habitat forced her increasingly into contact with those other sophisticated, tool-using primates: humans. She recognized that getting humankind on board with conservation was the key to preserving the earth for all species — and that people could change the world without going to live in Africa, spending time with the animals and writing books about them.

“The lifelong introvert overcame her shyness ‘out of necessity,’” TIME wrote in 2004. “Hearing few voices of optimism, she has raised hers, now spending 300 days a year traveling, lecturing about her research, and telling people, in her gentle, teacherly voice, ‘to keep up their hope, to feel that what they do can make a difference.’”

Read a 2002 column that Goodall wrote for TIME, here in the archives: The Power of One 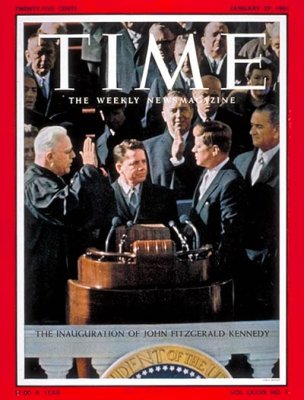 This Is the JFK Speech Obama Just Quoted in His Iran Deal Speech
Next Up: Editor's Pick