The Iron Giant May Return to Theaters This Fall

In May, Tomorrowland director Brad Bird let slip that The Iron Giant, his 1999 box-office dud turned beloved animated classic, might find its way back into theaters for a special re-release. “I think something will happen fairly soon,” Bird told Collider. “They know that people have a fondness for it. … I would love to see Iron Giant get back into theaters even if only for a week.”

It won’t be a week’s run, but pencil Sept. 30 on your calendar. Warner Bros. and Fathom Events are putting a remastered “Signature Edition” version of The Iron Giant in theaters for a very limited engagement. The special-event screening will take place at 7:00 p.m. on Sept. 30, with an encore showing on Oct. 4 at 12 p.m. in participating theaters around the country. The new remastered cut will include two all-new scenes.

“We can’t wait to bring this family favorite back its home on the big screen,” said Fathom Events CEO John Rubey, in a statement. “The Iron Giant is meant to be seen and heard in movie theaters and this is a great chance for fans new and old to enjoy this classic, remastered with new scenes.”

The Iron Giant tells the story of a rebellious Maine boy named Hogarth who befriends a towering 50-foot robot (voiced by Vin Diesel) who is both wanted and feared in 1957 America, at the height of Cold War paranoia. The film, Bird’s first as director, was soundly ignored at the box-office when it opened on Aug. 3, 1999, debuting at No. 9 and ultimately grossing only $23.2 million (reportedly less than a third of its production budget). But critics lavished it with praise and it went on to win nine Annie Awards. In the 16 years since, The Iron Giant has only risen in profile and is considered one of the richest animated films of an age mostly dominated by Pixar films. The gorgeous Mondo poster echoes the passion and artistry that drip off every frame of the film.

Following the brief theatrical re-release, a high-definition version of The Iron Giant: Signature Edition will be available from digital retailers in the fall of 2015. More information about the Sept. 30 re-release can be found on the Fathom Events tickets page. 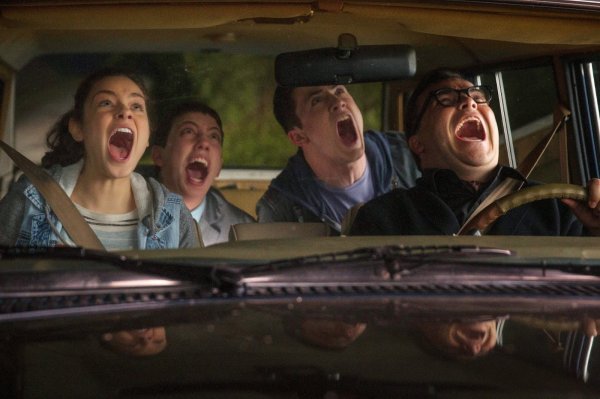 Watch Jack Black in the New Trailer for Goosebumps
Next Up: Editor's Pick