This Guy Just Wants to Know If He Sounds Gay

David Thorpe wants to make it very clear that there is no such thing as “gay voice.” That might seem like a strange talking point for a filmmaker promoting a new documentary, Do I Sound Gay, which explores exactly that phenomenon. But, as Thorpe tells TIME, “‘gay voice’ is just shorthand for the stereotype of the gay voice. There is no voice that every gay person has and that is limited to gay people.”

But that stereotype, and Thorpe’s own involuntary adherence to it, became a source of great discomfort for him in his early 40s, after experiencing a break-up and feeling “doomed to be a bitter old queen.” Increasingly unnerved by the sound of his voice, he became determined to understand what made his vocal chords vibrate.

Thorpe interviewed linguists and film historians. He spoke to prominent gay figures like Tim Gunn, Dan Savage and David Sedaris. He even worked with a speech pathologist to try to exorcise the sibilant S’s and elongated O’s from his words.

Do I Sound Gay, which debuts in New York City and on VOD on July 10, is about more than just one man’s voice. “I wouldn’t have made the film if my voice weren’t a proxy for my feelings about being gay and my feelings of self-worth,” Thorpe says. He spoke to TIME—in a voice, it’s worth mentioning, that was clear and confident—about those complicated feelings, the surprising origins of the pressure to be masculine and the mysterious effeminacy of Disney villains.

TIME: The impetus for the film was your discomfort with your voice in your early 40s. Was that the first time you felt that way?

David Thorpe: I’ve been self-conscious about my voice my whole life. At times when I haven’t had a lot of confidence, I’ve been more attuned to how I felt bad about being effeminate and how my voice was the leading edge of my effeminacy. The film describes a moment when I was really low. But it’s not the first time. I did a public access show where I dressed up as a women’s doubles team, and I had to be feeling pretty confident to do that. But when I saw the footage for the first time, I had a week of depression and nausea. But that was a time where I was feeling confident and happy, so I was able to move past it.

Was the discomfort fueled more by other people’s reactions or your own internalized homophobia?

The root of my self-consciousness came from being bullied into sounding and acting straighter. At a very young age, I learned to change who I was. I was in a very conservative, Southern environment, so there weren’t a lot of people to take cues from. And in gay culture, men receive images that masculine is good and effeminate is bad. On dating apps like Grindr, you come across “masc” for masculine, “straight-acting only.” I would never condemn someone’s sexual turn-on, but sometimes those messages felt more like brainwashing than a celebratory fetish.

Have you felt like people are going to be distracted by how your voice sounds and not listen to what you have to say?

My biggest fear, which was mostly irrational but sometimes justified, is that it wasn’t until people heard my voice that they realized that I am gay, and that once they realized that, they would treat me differently or dislike me. I felt like sometimes my voice came out before I was ready.

When you started looking into your voice, were you curious about nature versus nurture?

Mostly I wanted to know where my voice came from and why so many other gay men had the same voice. No one really knows why someone sounds gay, whether or not they are gay. This is not a question people are throwing money at. I believe it’s probably some combination of both.

How did you react when your childhood friend said that from high school to college, your voice changed drastically?

My friend sort of accused me of being an impostor. My initial reaction was, “How dare you? This is who I am and you have to accept it.” But I also understood, because I wasn’t 100 percent comfortable with my voice. I wondered if I was an impostor. It was kind of liberating—finally someone has acknowledged that they don’t like my gay voice.

It also sounds like you were suppressing a lot during childhood.

Without a doubt, I was butching it up as a kid to survive. But when I came out, suddenly I just wanted to be gay, gay, gay. My parents would always say, “Why does everything have to be gay with you?” I had forgotten that when I came out, I wanted to be as big and beautiful and flamboyant as I could be, and it was such a lightning bolt moment [to realize] how far I had come from that person.

The documentary delves into the history of cinema, showing how many villains are depicted as effeminate men with the stereotypical “gay voice,” down to Disney characters like Jafar from Aladdin and Scar from The Lion King. Do you imagine the creatives over at Disney having some conscious intention to have gay-sounding villains?

That moment in The Lion King where the parrot says, “There’s one in every family”—every gay man I know is like, “Yeah, there’s a fag in every family.” There are a lot of other bits where if they didn’t mean it, it’s certainly drawing on the code that means it. I watched Wreck-It Ralph, and the villain is very effeminate. The hero, played by John C. Reilly, calls him Nelly Wafer, and you’re like, “Are you kidding me?” There’s a clear connection between the implied sexuality and his being a villain.

You interview some celebrities, like Tim Gunn, who are beloved for their personas, which include sounding stereotypically gay.

I could see that there were men who sounded gay who were popular, and it was essential to go to someone like Tim Gunn and say, “So Tim, how do you feel about your voice?” What David Sedaris says was very liberating, because I thought, “If someone as successful as David can still have these feelings of shame surface, then it’s probably OK that I have them surface.” Some people who aren’t gay think that when you come out, you snap your fingers and you’re happy with who you are. And it’s so not the case. Some people quickly embrace who they are and some people never [do].

You also interview Zach King, a teen who was brutally attacked because of his effeminate voice. Having gone through this journey, what would you say to a teenager who’s confronting his voice and his sexuality?

I walked away from meeting Zach just astonished by his defiance. To believe so much in his right to be who he is was something I needed to relearn. I would never presume to tell a kid to come out or not. I think there are more opportunities now than ever for kids to see positive reflections of who they are, and if a kids feel safe, it can be only for the better. Hiding who you are is a terrible experience that hopefully less people are having, but Zach’s experience is still a reality for many kids. It will take a long time for the recent SCOTUS ruling on gay marriage to have an effect on the schoolyard.

How do you think the movie’s timing, coming out two weeks after the Supreme Court decision, is going to affect its reception?

I think the SCOTUS decision has created a paradigm shift about how gay people see themselves and how all of America sees itself. I made the film so that anyone could relate to it, but maybe because things have changed so quickly, more people will be interested in the film. I think the mainstream is ready to embrace stories about gay lives more now than ever. 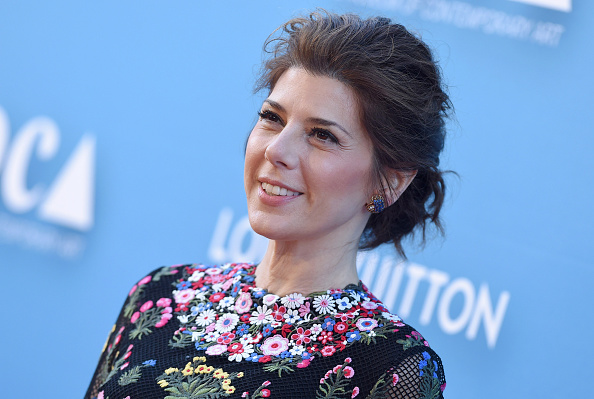 Marisa Tomei in Talks to Play Aunt May in Spider-Man
Next Up: Editor's Pick