Prince William and Princess Kate left the kids at home on Wednesday for a soggy afternoon date at Wimbledon’s Centre Court. (But hey, no kids!)

The parents of Prince George and Princess Charlotte – who just celebrated Charlotte’s christening on Sunday – were in the stands to watch local favorite Andy Murray play his quarter-final match against Canada’s Vasek Pospisil. (The score is currently 3-1 to Murray.)

Sitting in the royal box on a rainy afternoon, Kate – sporting new, shorter layers around her face – wore a $384 cardinal red Cayla Long Dress from LK Bennett, as she and William, in a suit and tie, watched the grand slam event after arriving in a Jaguar.

When the rain stopped play after 15 minutes, William and Kate chatted with other members of the royal box, including William’s aunt Sophie, Countess of Wessex, ex-Wimbledon champion Billie Jean King and Prince Albert of Monaco.

William and Kate, both 33, are avid Wimbledon fans and have played tennis against each other since their student days at St Andrews University – even using a public tennis court in her hometown of Bucklebury.

They also plan to upgrade the tennis court at their country home, Anmer Hall, to include an AstroTurf surface, copper beach border and surrounding oak trees.

Kate’s sister Pippa Middleton, attended the tournament on Monday, and her mom Carole and mother-in-law Camilla had a friendly meet-up there on Friday. 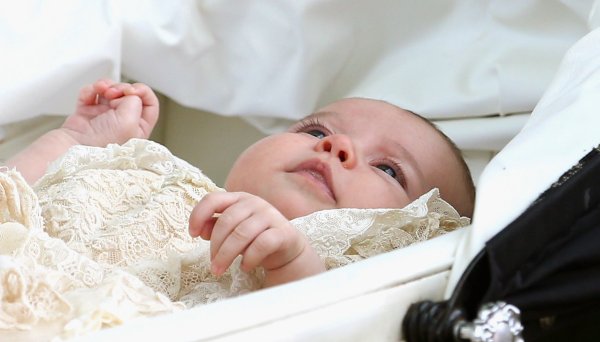 See the First Pictures of Princess Charlotte With the Royal Family
Next Up: Editor's Pick