A Facebook alternative for the devout launched by evangelical Christians in Brazil has amassed 100,000 users in one month, its founders say.

“On Facebook there is a lot of violence and pornography, so thought we’d found a network where we could talk about God, love, and share your word,” Faceglória web designer Atilla Barros told AFP. Barros and three other co-founders got the idea for the site, which features an “Amen” button instead of a “like” button, three years ago.

Almost two-thirds (63%) of Brazilians identify as Catholic, making the country home to the world’s largest Catholic population. But Brazil’s evangelical Christian population has exploded in recent years, growing from 6% of the country in 1980 to 22% in 2010. At that rate, the faith may become the most popular in South America by 2040.

Barros says the company wants to reach 10 million users in two years and believes its upcoming mobile launch will help it meet that goal. “We want to be better morally and structurally that Facebook,” he says. “What we want is that the entire Brazilian evangelical public migrate to Faceglória.” 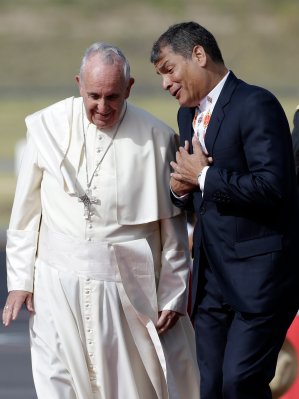