Why GoPros Are the Only Camera Worth Buying Right Now

A GoPro Inc. HERO3 camera is arranged for a photograph in Tiskilwa, Illinois, U.S., on Thursday, April 23, 2015.
Bloomberg—Bloomberg via Getty Images
By Alex Fitzpatrick

Apple’s latest ad campaign, “Shot on iPhone 6,” uses iPhone photographers’ gorgeous still images and video to ask one question: Do you really need a standalone camera anymore? For many, the answer is no—and that shows in camera companies’ performance. Nikon’s camera sales were down 15% in 2014, Canon’s by 7.3%.

But that pain isn’t being felt universally among camera makers. One in particular is doing just fine: GoPro, which in April posted a 54% year-over-year gain in revenue, though its stock price is floating at about half its all-time high Monday after going public last June.

GoPro is succeeding in selling cameras where its bigger, older rivals are failing because it’s taking advantage of a major shift in consumer tastes. For many people, smartphones are now good enough to replace typical compacts, like the Canon PowerShot line. There’s no reason to carry a comparatively bulky camera if your pocketable iPhone 6 or Samsung Galaxy S6 can take snapshots of your family’s trip to the zoo just fine. That leaves Canon, Nikon and other brands catering to a far smaller crowd of hobbyist and professional photographers, hurting sales.

GoPro, meanwhile, has positioned itself as the go-to brand of choice for the so-called “action cameras” — tiny box-shaped gadgets with ultra-wide lenses that can be attached to helmets or handlebars for hikers, bikers and climbers to get rad selfies for Facebook and Instagram. Since the introduction of the entry-level GoPro HERO, the company’s cameras now start at $129.99 and go all the way up to $499.99, adding bells and whistles like 4K ultra-high resolution video, Wi-Fi communication for slicker smartphone uploading and quicker burst photography along the way. The company’s newest entry, unveiled Monday, makes the whole package even smaller.

GoPro’s cameras are great because they offer something your smartphone doesn’t. Sure, you could probably mount your precious iPhone 6 on your skateboard helmet before you go bomb that killer hill. But would you really want to? That’s why—for most people—GoPros are the only standalone cameras worth buying right now. For everything else, there’s your phone in your pocket. 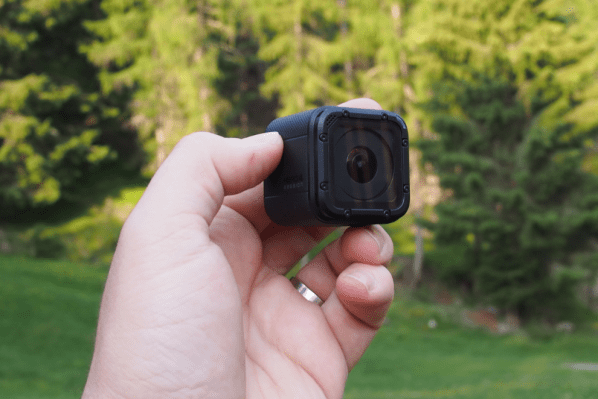 Hands-On With the Smallest GoPro Ever Made
Next Up: Editor's Pick