At a campaign function in New Hampshire over the weekend, Hillary Clinton called China’s rise to global eminence “the story of the 21st century” — a backhanded compliment of sorts, given that she went onto accuse the country of cyberwarfare against the U.S.

“They’re trying to hack into everything that doesn’t move in America — stealing commercial secrets, blueprints from defense contractors, stealing huge amounts of government information — all looking for an advantage,” she said. “Make no mistake: they know they’re in a competition, and they’re going to do everything they can to win it.”

Clinton’s remarks come three months after the U.S. government learned of a “massive breach” of federal databases that compromised the personal records of millions of federal employees. State officials believe the hackers were operating out of China, an allegation Beijing has called “irresponsible and unscientific.” A year ago, the New York Times reported that U.S. security agencies traced a similar incident last March to China, though it remains unclear if those hackers were state mercenaries or acting alone.

The specter of cyberwarfare and China’s territorial aggressions in the South China Sea have been the two most recent thorns in the side of Sino-U.S. relations, which Clinton struggled to thaw during her early years as President Obama’s first Secretary of State. The assertiveness she displayed at Saturday’s event is an obvious departure from those attempts at diplomatic cooperation, which were “interpreted as a sign of weakness,” as Aaron Friedberg, a professor of international affairs and former adviser to Dick Cheney and Mitt Romney, wrote in a recent op-ed for Politico.

Clinton’s remarks are also uncharacteristic of her campaign thus far. In spite of her diplomatic experience, the case she makes for her presidency has trod lightly on matters of foreign policy, trafficking mostly in domestic topics unlikely to prove controversial in a Democratic primary.

Former Maryland governor Martin O’Malley, who is trailing further and further behind Clinton in the polls, penned an essay for Foreign Policy last month that called for “a new agenda to improve our nation’s cybersecurity,” though he was reticent on the specific matter of China. The Republican camp, meanwhile, is harmonious in its frankness: last month, Chris Christie called for a “military approach” in response to China’s bravado; Mike Huckabee thinks the U.S. should “hack China back.” 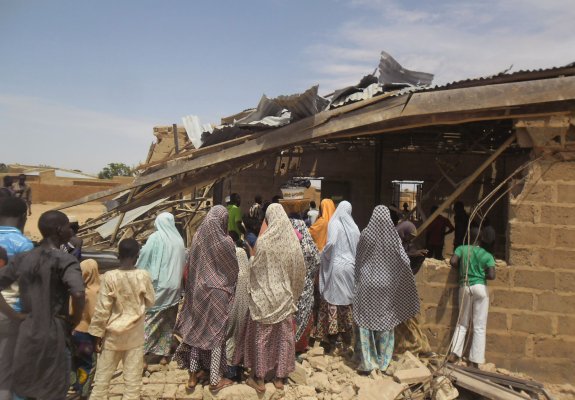 Nigeria Marks End to Bloody Week That Killed 200
Next Up: Editor's Pick