New York Giants defensive end Jason Pierre-Paul runs back an interception against the Green Bay Packers for a touchdown during the fourth quarter of a game at MetLife Stadium on November 17, 2013.
Reuters/USA Today Sports—Brad Penner
By TIME Staff

Jason Pierre-Paul, defensive end for the New York Giants, reportedly injured his hand while lighting fireworks at his Florida home on the night of July 4.

The NFL confirmed the incident on Sunday evening, noting that it could “potentially impact Pierre-Paul’s future with the Giants,” but Dan Graziano and Adam Schefter at ESPN later tweeted that his injuries — burns on his palm and three fingers, and possible nerve damage — likely will not prove “career threatening” and that the “prognosis is not terrible.”

On Sunday afternoon, as reports of the accident began making the rounds, Deadspin posted a string of tweets from Pierre-Paul’s neighbors documenting a “whole Uhaul van of fireworks” parked outside of his house. Pierre-Paul himself had posted a video to Instagram of himself and his infant son near to what appears to be the van.

Pierre-Paul, who turned 26 earlier this year, has played for the Giants since 2010, when he joined the team as the fifteenth overall pick in the NFL draft. His “prodigal talent,” as ESPN described it in 2009, when he was at the University of South Florida, has been an asset to the Giants’ defensive line, in spite of the team’s shaky record overall in the past few years. 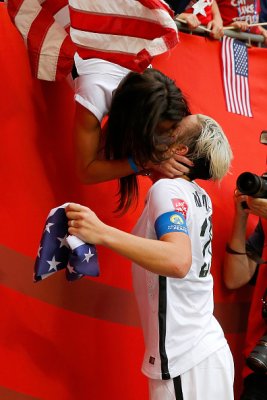 Abby Wambach's World Cup Kiss Will Warm Your Heart
Next Up: Editor's Pick