“Despite recent comments made by Russian Federation President Vladimir Putin, it is my belief that Russian forces may intend to advance further into Ukraine,” wrote Turner, a member of the Armed Services Committee and one of a few members positioning himself to succeed Chairman Buck McKeon (R-Calif.). “I am concerned that if this information is not presented to Congress or shared with the larger international community to include countries such as Ukraine, there will be little or no opportunity to deter or prepare for further Russian advances.”

“Any delay in this matter will only increase the likelihood of more violence as it allows Russian military forces to move freely and position themselves for additional advances,” he added.

Pressuring the Obama administration to release intelligence on Russian troop movements makes sense politically for Turner. Over the past three weeks, Congressmen have watched their leaders haggle over an aid package dragged down by disagreements over reforms to the International Monetary Fund and the Internal Revenue Service. Meanwhile, Congressman Turner has sought to raise his profile in responding to the Ukrainian crisis by partnering with others to craft legislation that would export U.S. liquefied natural gas in an effort he believes would undermine Russia’s energy power.

But the letter could complicate things for President Obama. The U.S. has said it will not intervene in Ukraine militarily, so there’s nothing the U.S. can do to halt further Russian moves inside Ukraine if Putin chooses to act. Defense Secretary Chuck Hagel made clear Wednesday how little the U.S. plans to do militarily.

“As to continued assistance to the Ukrainian government, I think most of you know that the MREs have been approved,” Hagel said, referring to the packaged Meals-Ready-to-Eat that often sustain U.S. troops. “They’re on their way. The president’s national security team is reviewing all the other requests for assistance, in particular the nonlethal assistance to Ukraine.”

More importantly, if Obama were to detail all he and U.S. intelligence know about Russian troop movements, the tougher it will be for Putin to pull back, should he choose to do so. Such “wiggle room” lubricates diplomacy.

“When we receive the letter, we will respond appropriately,” said Cmdr. Elissa Smith, a Pentagon press secretary.

With reporting by Mark Thompson 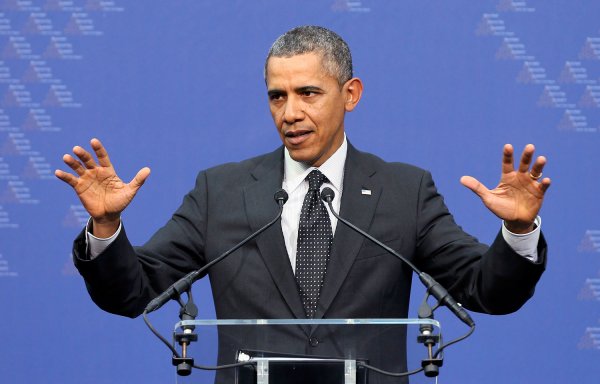 Obama Really Is Worried About a Manhattan Nuke
Next Up: Editor's Pick