The speech was billed an address on the economy. But by the time he finished, it was clear that Republican presidential candidate Rick Perry was here to talk about race.

About a lynching of a black man that took place 99 years ago in his home state of Texas. About his party writing off black voters because Republicans didn’t need them to win elections. About the GOP’s embrace of states’ rights over civil rights. In a sweeping, 30-minute speech to the National Press Club, the former Texas Governor offered a mea culpa for discrimination in America and pitched an aggressive reboot for Republicans’ relationship with black voters.

“We cannot dismiss the historical legacy of slavery, nor its role in causing the problem of black poverty,” Perry said during an appearance that at times was an indictment of how the nation treats minorities and a litany of promises to fix that. “And because slavery and segregation were sanctioned by government, there is a role for government policy in addressing their lasting effects.”

A charismatic speaker and shrewd politician, Perry needs such a dramatic move to convince voters that he is not the bumbling White House hopeful that he was in 2012. During that earlier bid, he stumbled during debates and delivered uneven performances with voters. Seeking redemption, Perry is trying again to win the nomination with a campaign that could force his party to confront sometimes-uncomfortable realities.

“There has been—and will continue to be—an important and legitimate role for the federal government in enforcing civil rights,” Perry said, adding he was among those who favored autonomy for states to address the issue. “For too long, we Republicans have been content to lose the black vote because we found we didn’t need it to win. But when we gave up on trying to win the support of African-Americans, we lost our moral legitimacy as the party of Lincoln, as the party of equal opportunity for all. It is time for us to once again reclaim our heritage as the only party in our country founded on the principle of freedom for African-Americans.”

Perry’s gambit to win over African-American voters is not an original play. Sen. Rand Paul, a Kentucky Republican also seeking the GOP nomination, has made urban outreach a central part of his campaign. Paul often travels to historically black colleges and meets with black pastors on the road. Yet the Texas twang of Perry talking about the GOP and its legacy with African-Americans was at time discordant with his typical fixation on cutting taxes and regulations.

“Democrats have long had the opportunity to govern the African-American communities,” Perry said. “It is time for black families to hold them accountable for the results.”

Citing higher poverty rates, lower-performing schools and fewer opportunities, Perry said Obama’s tenure as the nation’s first black president made history but did little to improve life for African-Americans. “I’m proud to live in a country that has an African-American President. But President Obama cannot be proud of the fact that the prevalence of black poverty has actually increased under his leadership,” Perry said.

By contrast, Perry pointed to his 14 years as Texas’ governor when its economy boomed. African-American graduation rates climbed from 27th out of 50 states in 2002 up to first in the country when he left office earlier this year. From 2005 to 2007, more blacks moved to Texas than to any state other than Georgia. (Hurricane Katrina destroying next-door Louisiana in 2005 helped that.) Perry also closed three prisons and reformed sentencing guidelines for non-violent drug offenders. “Each one of those new resident was welcomed to Texas, with open arms,” Perry said.

Asked after his speech about the debate underway in South Carolina about the Confederate flag, Perry said it was up to legislators in that state. Yet he also noted that, as Governor, he removed a plaque commemorating the Confederacy and moved it to a museum. Texas also stopped issuing Confederate license plates. “It makes sense to come up with ways to bring this country together,” Perry said.

Perry began his appearance by discussing the ugly lynching of Jesse Washington in Waco, Texas. Washington, who was black, pleaded guilty to raping and murdering his employer’s white daughter during trial and was convicted. The judge sentenced him to death—a sentence carried out in front of Waco City Hall, where he was tortured, mutilated and burned in front of a crowd of thousands.

Perry ended his speech with an acknowledgement: “America has never been perfect. No country composed of imperfect beings ever could be.  But there is no country that has achieved more than the United States of America.” 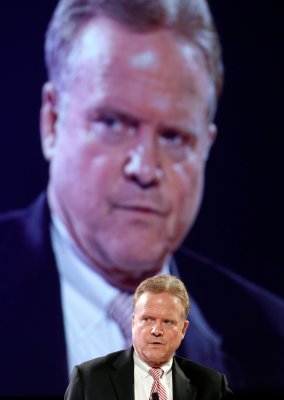