A "now hiring" sign is viewed in the window of a fast food restaurant on August 7, 2012 in New York City.
Spencer Platt—Getty Images
By Claire Zillman / Fortune

The United States labor market put in a tepid performance in June, with the addition of only 223,000 jobs, according to a report released by the Bureau of Labor Statistics on Thursday.

According to the household survey, unemployment declined to a seven-year low of 5.3% in June, after inching up to 5.5% in May.

Though the jobs report’s top line numbers were not too bad, a closely-watched sub-indicator didn’t show such good news: hourly wages remained flat in June. That stagnation could delay a long-awaited hike in interest rates. After the May jobs report showed that wages had increased by 8 cents per hour, Federal Reserve chair Janet Yellen said at a press conference June 17 that “wage increases are still running at a low level, but there have been some tentative signs that wage growth is picking up.”

Thursday’s report—released a day early because of the observation of the July 4th holiday on Friday—also showed that labor force participation dipped by 432,000 or 0.3% in June after an increase of similar size in May. The share of Americans participating in the labor market fell back from 62.9% in May to 62.6%–its lowest since 1977.

The number of long-term unemployed who’ve been without a job for 27 weeks or more declined by 381,000 to 2.1 million in June. Over the past 12 months that figure—which currently makes up 25.8% of the unemployed—has decreased by nearly 1 million. 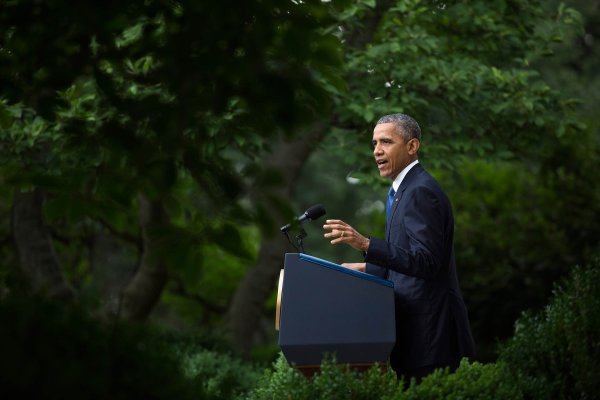 What to Know About Obama's Overtime Pay Announcement
Next Up: Editor's Pick