Former Sri Lankan president Mahinda Rajapaksa sits next to his wife Shiranthi Rajapaksa during a religious ceremony at his residence in Medamulana, Sri Lanka, on July 1, 2015.
Dinuka Liyanawatte—Reuters
By Amantha Perera / Colombo and Nikhil Kumar

Six months ago, Maithripala Sirisena pulled off a stunning electoral upset in Sri Lanka, defying expectations to defeat incumbent President Mahinda Rajapaksa in a national election. Sirisena, a former Health Minister for Rajapaksa, rode to victory supported by a diverse political coalition united, above all, in its desire to displace the Sri Lankan strongman accused of increasingly autocratic rule.

Rajapaksa, who in 2009 ended a three-decade-long civil war with separatist Tamil guerrillas seeking an independent homeland in the north of the country, depended on the country’s Sinhala Buddhist majority to stay in power. Sirisena, himself a Sinhala Buddhist, was backed by minority Muslims and ethnic Tamils sidelined under Rajapaksa, along with many Sinhala Buddhists tired of the heavy-handed former leader. “The Mahinda Rajapaksa era is over,” Sirisena told TIME after his victory earlier this year.

His former boss, however, refuses to go away. With characteristic theatricality, he summoned the media to his ancestral home in southern Sri Lanka on Wednesday to outline his ambitions for a comeback. Standing at a podium installed near a tree that formed the backdrop for his late father’s addresses to his supporters — Don Alvin Rajapaksa was a prominent politician from the region — the former President said he would contest a seat in parliamentary elections set for August after Sirisena dissolved the Sri Lankan legislature on Friday. His goal: to become Prime Minister (and thorn in his former ally’s side).

“For the sake of the country … we will contest the upcoming election,” he said. “I ask all patriotic forces from all parties to join us in this struggle to regain the integrity of our motherland.”

But although the setting was rich with political imagery — before making his way to the podium, and with the media at hand, he listened to a Buddhist sermon at his family home — Rajapaksa was more subdued than usual as he made the much anticipated announcement. And he failed to answer a critical question: Under which political banner will he seek a parliamentary seat?

Both Rajapaksa and Sirisena belong to the Sri Lankan Freedom Party (SLFP), a section of which remains loyal to the former Sri Lankan leader. But Sirisena, who became the head of the party when he was elected President, has thus far resisted allowing Rajapaksa to run as an SLFP candidate. Rajapaksa didn’t specify whether he would continue to seek an SLFP ticket or if he would try to run as part of the broader United People’s Freedom Alliance, a political coalition led by the SLFP and chaired by Sirisena.

“It will be an uphill task for [Rajapaksa] to become a real force because right now there is no clear sign whether he has a party machinery to back him,” Jehan Perera, a political analyst and executive director of the Colombo-based National Peace Council, told TIME.

The elections will help determine the fate of Sirisena’s reform drive. In January he won with promises to, among other things, dismantle the executive presidency and devolve more power to the legislature by strengthening the Prime Minister’s office. His rise also brought hopes of reconciliation in a country marred by a deep ethnic divide. As President, Rajapaksa brazenly rejected international calls for a thorough and impartial investigation into allegations of human-rights abuses by the Sri Lankan army in the final months of the civil war. Sirisena campaigned with a promise to hold an independent domestic probe into the claims. The international community was supportive after he came to power, with the U.N. deferring the release of its own report into the matter until later this year to give Sirisena time to put together a domestic process.

To implement his promises, Sirisena appointed Ranil Wickremesinghe, a veteran of Sri Lanka’s fractious political scene and leader of the Untied National Party, as Prime Minister to head a minority coalition government. With Wickremesinghe at his side, he succeeded in introducing some checks on the power of the presidency, including bringing back a two-term limit for incumbents that had been scrapped under Rajapaksa.

But with the Rajapaksa faction in Parliament acting as a roadblock, he had to discard his ambition to abolish its executive powers altogether. Lacking a two-thirds majority in the legislature, he also had to shelve a planned overhaul of the voting system and a right-to-information law to make government more transparent.

Sirisena now needs a Parliament that will be sympathetic to their cause, with enough MPs allied with the President to push through reforms. Rajapaksa’s candidacy means that the final outcome could hinge on the country’s minorities, says Perera.

Although Rajapaksa is unlikely to achieve his ambition to become Prime Minister without the backing of the SLFP, he could nonetheless split the Sinhala Buddhist vote if he and his supporters break away and run independently. In January, although he lost the presidential election, he attracted the majority of Sinhala Buddhist ballots and he remains popular in southern Sri Lanka. 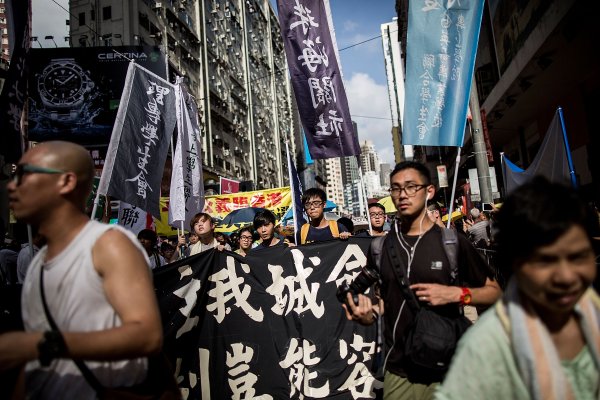 In Hong Kong, Thousands March Toward a Political Impasse
Next Up: Editor's Pick