But step aside, ladies. For this World Cup is now Carli Lloyd’s.

Lloyd, a two-time Olympic gold medal winner making her third World Cup appearance, is no stranger to soccer fans. But for the millions of more casual viewers tuning into America’s quest for its first World Cup since 1999, she’s now a water-cooler fixture. Lloyd has scored a goal in each of Team USA’s knockout-round victories on the way to the World Cup final, which will be played on July 5, when the U.S. will face the winner of Wednesday’s Japan-England semifinal.

Against Germany in Tuesday night’s semifinal, Lloyd’s second-half penalty kick gave the U.S. a 1-0 lead. Later, Lloyd stayed patient while dribbling in the goal box, waiting until Kelley O’Hara was in position to take her perfect pass and boot the insurance goal into the net. U.S. 2, Germany 0.

So America, if you’re not already invested in the World Cup, meet Carli Lloyd. A few quick essentials:

1. Lloyd has a history of shining in big moments: Sports Illustrated put her on the cover of its World Cup preview, with the tagline: “She’s Got Clutch.” No cover jinx in this World Cup — far from it. Lloyd scored the gold-medal winning goals in both the 2008 and 2012 Olympics. All this bodes well for Team USA’s chances on Sunday.

But so, so good. If coaching Lloyd, 32, has been a challenge, it’s certainly been worth any headaches. Lloyd called Sundhage’s comments “confusing.” America and Sweden played to a 0-0 draw during the knockout stage of this year’s World Cup.

3. Lloyd, who grew up in southern New Jersey and attended Rutgers University, credits a lot of her success to training with a former Australian pro player named James Galanis, described by the Wall Street Journal as “paunchy and bespectacled,” and someone who “comes off like a wizard instructor from the Harry Potter films.” Lloyd was supposed to take a ski trip with some friends while she was at Rutgers; Galanis told her if she was serious about making the US team, she had to skip the vacation.

To the cheers of many Americans, Lloyd put in the work. All that’s left is a World Cup win. 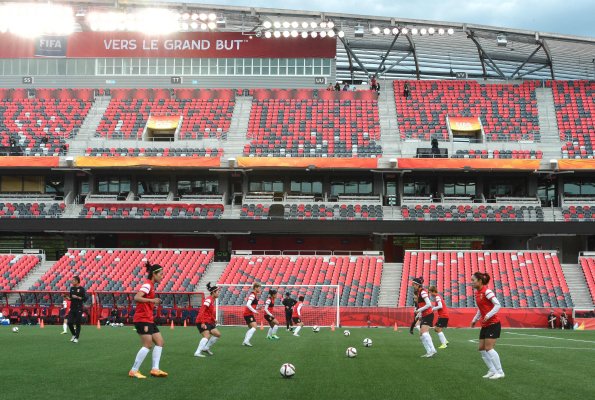 In Women's World Cup, U.S. Feels Weight of Expectations
Next Up: Editor's Pick