Greeks Fear a 'Haircut' on Their Savings As Bailout Deal Expires

A Greek national flag flutters atop a building as dark clouds fill the sky in Athens on June 30, 2015.
Alkis Konstantinidis—Reuters
By Simon Shuster / Athens

The phones at Tax Solutions, an accounting firm in the south of Athens, began ringing non-stop early on Monday. On orders from the Greek government, the banks did not open that morning as harsh restrictions were imposed on the amount of money their clients could withdraw.

The accounting firm’s CEO, Vassilis Bagourdis, had been up since dawn, nervously puffing at cigarillos and trying to figure out what the capital controls could mean: Had Greek banks at last run out of money? How long would they stay solvent? And could the government now levy a tax on deposits like the one Cyprus imposed two years ago?

This scenario, which amounts to the seizure of money from private accounts, would be the latest in a fast succession of financial nightmares for Greece, but at this point, Bagourdis says, “There is no telling what tomorrow will bring.” As of midnight on Tuesday, the bailout program that has kept the Greek economy afloat officially expired, and Greece missed a $1.6 billion payment to the International Monetary Fund, meaning it has essentially defaulted on its debts. As a condition of any more assistance, Greece’s creditors have demanded more reforms and austerity measures, including tax hikes and pension cuts, which Greek Prime Minister Alexis Tsipras has repeatedly rejected.

His government is clearly getting desperate. As the midnight deadline approached, Tsipras appealed for another bailout from the 18 other European countries that use the euro as their currency. It would be the third bailout Greece has received in five years. The first two were worth a combined 240 billion euros, and the third one that Tsipras requested would need to extend at least another 30 billion euros over the next two years just so Greece can make payments on existing debts. After an emergency conference call on Tuesday, however, European finance ministers denied his request.

That pushed Greek banks closer to the brink. Over the weekend they had already been cut off from emergency cash injections from European Central Bank, prompting the government to limit withdrawals from each account to a mere 60 euros per day, barely enough for a family to go grocery shopping in Athens. On top of those restrictions, the banks will also remain closed for a “holiday” at least through July 5, which is the next day of reckoning on the Greek financial calendar.

That morning polls are scheduled to open for a national referendum on whether or not to accept the conditions of more assistance from the country’s creditors. It is a bizarre choice to put on a ballot, not least because the creditors formally withdrew their offer as of midnight on Tuesday, when Greece’s bailout program expired. So if the referendum goes ahead – and that is still a big “if” – the Greeks will be asked to vote on a deal that is no longer on the table. Still, the outcome of the vote would mark another step toward the dreaded deposit tax, sometimes called a “haircut” on deposits.

Innocuous as the euphemism seems, this measure would amount to the government seizing the money it needs from regular people’s accounts. “Depending on how the referendum goes, I’d say there is a 60-70% chance of a haircut,” says Bagourdis, whose clients include businesses that would be devastated by such a move.

Some opposition lawmakers put the odds even higher. If voters reject the terms of continued aid from Greece’s creditors on July 5, “the chances of a haircut would be certain,” says Haris Theoharis, a parliamentarian who until late last year was Greece’s top tax collector.

It would in some ways be a repeat of the 2013 crisis in Cyprus. In March of that year, the European Central Bank also stopped providing cash injections – known as emergency liquidity assistance (ELA) – to struggling Cypriot banks, much as it did to Greek banks over the weekend. The government in Cyprus complained that this was a form of blackmail from its European creditors, but in the end it was still forced limit cash withdrawals and impose a tax on deposits, shaving 10% off the value of uninsured accounts that were worth more than 100,000 euros.

In part because many of those accounts belonged to wealthy foreigners – primarily Russians who were using Cyprus as a tax haven – the country did not see any mass unrest after its haircut on deposits. “But here it would be different,” says Bagourdis, who also serves as a senior adviser to the opposition New Democracy party in Greece. “Here it would be regular families and businesses that suffer from this measure.”

Though the current government denied that it was considering such a move earlier this year, the possibility of such a stopgap measure has made many Greeks nervous. In May, the Guardian newspaper quoted an official from the Greek central bank warning that this could cause a violent public backlash. “We would see the revolt that this crisis has not yet produced,” the official was quoted as saying. “There would be blood in the streets. The Greeks are not like the Cypriots.”

It would then be very hard for Tsipras to maintain his base of support – and to stay in power – especially considering that he was elected in January on a promise to end austerity and reduce the tax burden on workaday Greeks. But the dramatic collapse of his negotiations with Greece’s creditors since then has left Tsipras with fewer and fewer options. As part of a new bailout deal, European financial institutions could even insist on a haircut on deposits, much as they did during the Cypriot crisis of 2013.

So even if Greeks vote on July 5 to accept the harsh terms of their country’s creditors – as European leaders have urged them to do – they would still not take the prospect of a deposit tax off the table. “We would still be moving in that direction,” says Bagourdis. As its options for emergency financing are whittled down, the Greek government could be left with no other choice. 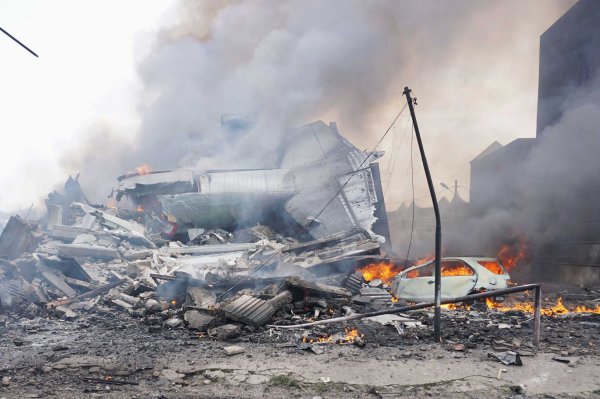