The same week that terrorists attacked Kuwait and Tunisia, the U.S. Supreme Court struck down laws banning same-sex marriage. These events might seem unrelated. But they are symptomatic of the stark split in our world.

The contrast was vivid. The Atlantic’s Jeffrey Goldberg tweeted:

The pageant of barbarism of the events in Kuwait and Tunisia has become the tragic hallmark of much of the Middle East. The oppression of women, the persecution of gays, anti-Semitism, and a drive to terror grips many in the Muslim world. Across the Middle East there is a terrifying descent into cruelty that is justified in the name of religion but has much more to do with the wanton liberation of the darkest devils hidden in human souls. To claim divine warrant for beheadings is simply to give your sadism wings.

In the U.S., while bigotry and cruelty also exist, there is a powerful, countervailing force. The drive to accept rather than anathematize the other is a growing force in our culture. It can lead to absurdities and contradictions: People’s self-definitions often seem more whimsical or deliberately provocative than serious, and we know that in the name of not offending there are demands that infringe on others’ freedom of speech. To be thin-skinned is too often defended as a “right,” and normal discourse too often has to be hedged with qualifications and “trigger warnings.” But these are correctible excesses of a fundamentally sound principle, the drive to embrace the other.

America, which was founded to gather the “wretched refuse”—people of different types, from different places, opened its arms to a new kind of diversity in approving same-sex marriage. In the Middle East, people who were nominally practitioners of the same religion were not only fighting, but deliberately blowing up non-combatants. One was a license to love; the other was a drive to destroy.

On July 4, you will hear about the ways in which America is falling short of its promise. There will be accusations, and politics will inevitably intrude. But when you read the doubters and detractors, remember what we stand for in the world. For some people who felt unwanted and even disdained, America just became a little bit more of a home. Happy July 4, and God bless America. 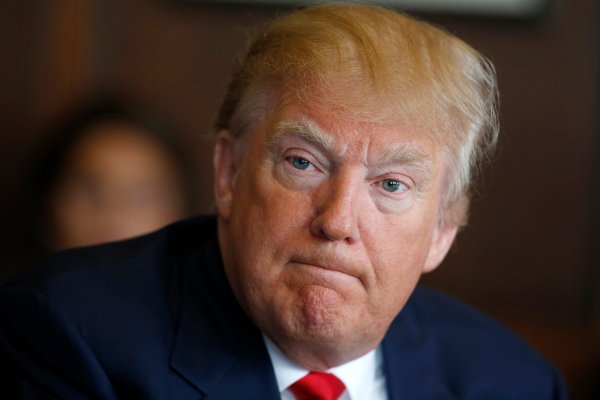 America's Not Ready to Dump Trump
Next Up: Editor's Pick