The Bachelorette Watch: Getting Really Real In Ireland

Welcome back to The Bachelorette where Kaitlyn has consummated her relationship with Nick and apparently told Shawn that he was The One and is now doubting all of her choices on her Path to Love. So much drama, so little time. Moving forward, this show should definitely be four hours long.

The Shawn Situation: Shawn sits in Kaitlyn’s room demanding to know if she is in love with him. She dithered and then said she was falling in love with him. He can’t handle the fact they had a great date and then she went on a date with someone else, which is, you know, the entire premise of the show. Later, Kaitlyn cries and cries to the camera. She feels awful. Not because she feels guilty about “being intimate” with Nick, it’s that her feelings for Shawn are overwhelming and she doesn’t want to hurt him. And she knows that she already has, he just doesn’t know it yet. It makes sense. Dating a baker’s dozen of guys is definitely hard, especially if you’re throwing sex into the mix with one of them, but presumably not all. Shawn claims that off camera Kaitlyn told him that he was the one, so she is now his girlfriend, the end. The show should just end now.

Two-on-One Date: Now that she has gone head-to-head with Britt, Kaitlyn probably recognizes the true horror of the dreaded two-on-one date as she has stared right into its nightmarish maw. Still she makes J.J. and Joe take part in their torture. As they explore some Irish island, Joe says he wants to focus on the relationship he has with Kaitlyn and express how he feels about her, while J.J. “needs” to tell Kaitlyn about the biggest regret of his entire life. Um, no, you probably don’t. During his Kaitlyn time, Joe swears he’s never felt this passionate before, but he says it like he had his entire face Botox’d for the occasion. He tells her he is falling in love with her — once again without registering any emotion in his face-and they make out. Guess she’s into a guy who doesn’t mind a little cosmetic upkeep. J.J. uses his alone time to tell Kaitlyn that he cheated on his now ex-wife. He swears it was a learning experience. Kaitlyn applauds his honesty and then bids him farewell. He wipes his nose on his hand and pats her on the leg. He claims he feels blind sided by her decision. Meanwhile, Kaitlyn makes Joe earn his date rose. They make out while Shawn’s disembodied voice talks about his feeeeeeeeelings.

The Shawn Situation, Part II: When Joe comes back from his date saying he is falling in love with Kaitlyn, Shawn storms out of the room. He needs to talk to Kaitlyn. When the producers tell her that Shawn is on his way up, she flips out, convinced that he knows she slept with Nick and is going to have it out with her. She does not want to talk, but opens the door anyway (the producers probably make her stop hiding in the bathroom). She’s convinced she’s about to get an earful, but he just wants to talk about himself and his feelings and barely seems to notice that she’s crying. As he winges, she points out that they are on a reality show and if they are going to be together, they have to see it through to the end. Kaitlyn is unimpressed with his whining and realizes that she screwed up by reassuring Shawn about his place in her heart. She also knows it went too far with Nick, because she has other relationships to think about.

The Cocktail Party: She tells the guys that she has made some mistakes and had a rough week, but swears her heart is still open. The men do not look reassured while she chugs her wine and hyperventilates. When she slips away with Ben H., the men sit around trying to figure out what “mistakes” she made. Nick looks like he has a stolen Penny Black in his pocket (or, you know, is the guy who just slept with seven other guys’ girlfriend) and is trying to look innocent. Nick should rest easy because paranoid Shawn knows (knows!) she was referring to him. Despite the fact that Kaitlyn came to the cocktail party clearly rattled, Ben H. wants to talk about his feelings. Then Nick wants to talk about his feelings, but Kaitlyn wants to remind him not to kiss and tell. He starts to cry (?!) because of all his Big Feels and she has no choice but to make out with him. Then she talks to Shawn about his Big Feels and tells him that they have to dial down their emotions because there is still a lot of dating to get through. Man, Kaitlyn really deserves an Amy Schumer-sized glass of wine right now.

The Rose Ceremony: Chris Harrison finally shows up to chuck Kaitlyn on the chin and say ‘go get ’em tiger’ before sending her to the wolves. Nick, Jared, and Joe all have roses, which means there are only three roses to hand out. Ben H. gets the first rose, The Dentist gets the second rose, and Shawn is clearly sweating bullets down his dorky blue suit. As she holds the final rose of the evening, Kaitlyn looks like she’s going to cry as gives the final rose to Shawn. That means Ben Z and a guy apparently named Tanner who is apparently on this show is going home (apparently). Much like J.J., Ben Z was blind-sided by his dismissal by “cool girl” Kaitlyn.

Road Trip: Kaitlyn packs up her posse into a bus called a “Paddywagon,” but then invites Jared to go for a spin and get lucky in Ireland. They kiss the Blarney Stone, they kiss each other, they make out in her hotel room with cocktails in hand, she teaches him to drive stick shift, which is not a euphemism. Everything seems great. …Then Chris Harrison knocks on Kaitlyn’s door and tells her they are shaking things up. To even the playing field, the show is giving all the men “off camera time,” which is what they call it in the biz, apparently. However, she will need to cut her six remaining suitors to three, today. She will then have overnight dates with those three men and then meet their families after she’s spent a night in the Fantasy Suites. He also encourages her to make amends for her indiscretion or something gross. Chris leaves her alone to think about hanging out with the families of her suitors, post-Fantasy Suite. Should make excellent fodder for dinner table conversation!

Bachelorette Milestone: Kaitlyn invites The Dentist for a helicopter ride. They fly over the Cliffs of Moher, which are truly stunning, and as they pause for a picnic, Kaitlyn reminds us all that there is no rose on this date, because she is here to find herself a husband. She seems stressed and anxious and starts crying and it seems clear that she’s having the least fun of any Bachelorette ever. She cries and finally admits that she’s just not that into him. He would like more details for his logic board to process. She tells him again and he processes the information. He tells her that he really wishes she could be his wife, but hugs her goodbye and goes to cry over the Cliffs of Moher talking to himself in the third person, as he waits for the producers to call him for his audition to be The Bachelor (or the faerie folk to carry him off to care for their teeth).

Best Reason To Come Back Next Week: The Final Three are chosen (maybe). 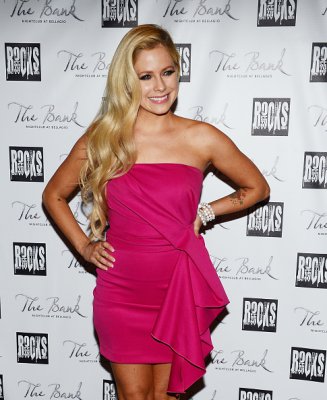 Avril Lavigne Is 'Excited for Life After' Lyme Disease
Next Up: Editor's Pick