James Wolk has left Mad Men behind in the most definitive way possible.

The actor, known for playing a mendacious adman on the recently-concluded drama, has put aside the period outfits and the office politics in favor of saving the world. On CBS’s new drama Zoo, premiering Tuesday night at 9:00pm ET, Wolk’s a safari guide whose expertise comes in handy once animals begin systematically turning on humans. The mystery promises to unfold over the course of the summer, as does Wolk’s newfound stature as an action hero.

The actor brings shades of Indiana Jones to his performance, and says he was also inspired by Jurassic Park, another onscreen tale of men battling nature. Wolk talked to TIME about Zoo, Jurassic, Bob Benson’s future, and his dog.

TIME: This show depicts fairly outlandish events, but with a straight face. What’s the mood you’re aiming for?

James Wolk: As an actor, we’re striving for realism with this show. The subject matter is a heightened realism, but from an acting standpoint, we want to bring as much reality to the situation as we can. And the budget is pretty significant–we’ve had about 60 percent of our scenes filmed with live animals. There’s definitely green-screen, and safety’s a huge concern for the actors and the animals, but as much as we can get away with, we’re doing it. It’s kind of exciting; we’ve worked with lions, leopards, wolves, bears…

So are you an animal lover?

I’m a dog lover. I had a golden retriever growing up and now I have a shepherd mix. I’m very comfortable around dogs. When it comes to cats, I’m a little less comfortable, and with big predator cats, even less comfortable. We have incredible trainers, we have the Humane Society on set. When I’m four feet from a brown bear, though, there’s still a huge sense of understandable fear as a human—they’re so powerful! There’s a wild factor that’s like nothing else.

As an actor, you’re looking for realism. But how would you describe the tone of the show as a viewer? It didn’t seem to fit in, to me, with a lot of what’s currently on the air?

It’s its own genre. It’s not a procedural, it’s not a drama. I think this show could be compared to a summer, fun film that would be a blockbuster, but it’s on your TV. It’s a thrilling ride, and it’s kind of its own genre. It has a Jurassic Park feel to it—it’s this fun, thrilling series.

Are there real-world concerns at play, here?

I just talked with James Patterson a bit—he’s the creator behind all of this, it’s based on his book—and he said something like, It’s obvious that this is not factual, and definitely fictional. And it is fictional—but based on real-life things that are happening, like the concern about global warming. These are questions every human asks. This show takes these questions, and there’s a reality that draws people in.

How does your character here, Jackson Oz, differ from the character with whom you’re most identified, Mad Men‘s Bob Benson?

The fun for me is in playing all different kinds of characters. Jackson’s a straight shooter and a reluctant hero. He just wants to live his life taking safaris in Africa and having drinks at night. And then things go awry, and he’s forced to save the world. He doesn’t want to be there, but he’s there. If anything, this guy has altruistic motives, not hidden motives.

The question of Benson’s motives became the hottest topic among Mad Men fans for quite some time. What do you hope happened to Bob after he left our view?

My hope is that Bob found a nice life in Detroit as an executive, put away all of his hidden agendas, and just was able to kind of exist and be who he is.

Are there any actors or films you used as reference points for your Zoo role?

I think of a lot of films I enjoyed that had heightened elements. To go back to Jurassic Park or World War Z with Brad Pitt. I love Jurassic Park. I felt with both of these films, these heightened, fantastical scenarios, dinosaurs coming back, zombies… In the wrong hands, it wouldn’t be believable, but in the right hands, it was fantastic. I believed them to the point that I was right on the edge of my seat. For me as an actor, the key element was those actors played the realism of what would happen if. How would you behave if. Play the reality, as if. They played it with realism.

What would you do if animals overtook the earth?

If I was James Wolk, an actor, and the animal apocalypse happened, I’d try to board up the house and hold out. If I were Jackson Oz and I were an animal expert and my father knew this whole thing was going to happen and my skills could help the situation, I would try to help.

If you were an animal, which one would you be?

I would be a dog. My dog! She gets to sleep all day, she gets fed, she gets pet. She has a pretty good life. 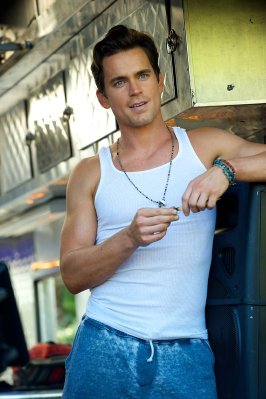 Matt Bomer on Magic Mike XXL: It's All About Strong Female Characters
Next Up: Editor's Pick