Here’s How Many Americans Sleep With Their Smartphones

Nearly three-quarters of Americans (71%) who own smartphones sleep with them — either by putting their phone on a nightstand, in their bed, or, for 3% of people, holding it in their hands.

A new mobile consumer report from Bank of America found that not only do Americans sleep with their smartphones, but the devices are also the first thing on people’s minds when they wake up: 35% of respondents said their first thought in the morning is about their smartphone; 10% said it was for their significant other.

The new report underscores an increasing trend of smartphone reliance among owners of the device, especially Millennials.

Throughout the day, more than half of Americans, about 57%, say they use their phone at least once an hour. In New York, that statistic jumps to 96%. In California, it’s 88%.

This constant interaction with smartphones means that Americans are increasingly using their phones for banking. More than half of the survey’s respondents said they use either an app, or a web browser as their primary form of banking. In California, 57% of residents are actively using a mobile banking app, mainly for banking notifications and alerts, checking balances, and mobile check deposits. By comparison, 53% of New Yorkers and Texans actively use banking apps.

Not crazy about smartphones? You might want to move to Denver. The city’s respondents are the most likely to survive without their smartphones: 49% said they would choose phone calls if they could only keep one feature of their phones (that’s 10% above the national average); and 27% of Denver respondents said they could refrain from using their phones indefinitely.

But even in Denver, the trend is inescapable: 63% of Denver residents sleep with their phones.

The Bank of America study surveyed 1,000 people who own smartphones and have banking relationships across the United States, plus 300 people in key markets such as New York, Denver, and California. 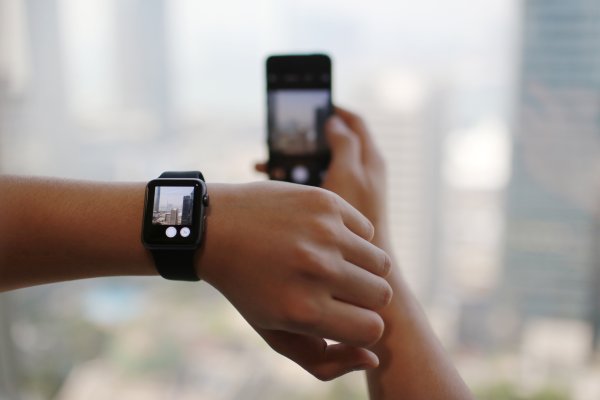 The Apple Watch's Best Feature Is Coming to the iPhone
Next Up: Editor's Pick