A few years ago, when Greece was still at the start of its slide into an economic depression, the Nobel prize-winning economist Joseph Stiglitz remembers discussing the crisis with Greek officials. What they wanted was a stimulus package to boost growth and create jobs, and Stiglitz, who had just produced an influential report for the United Nations on how to deal with the global financial crisis, agreed that this would be the best way forward. Instead, Greece’s foreign creditors imposed a strict program of austerity. The Greek economy has shrunk by about 25% since 2010. The cost-cutting was an enormous mistake, Stiglitz says, and it’s time for the creditors to admit it.

Along with a growing number of the world’s most influential economists, Stiglitz has begun to urge the troika to forgive Greece’s debt – estimated to be worth close to $300 billion in bailouts – and to offer the stimulus money that two successive Greek governments have been requesting.

Failure to do so, Stiglitz argues, would not only worsen the recession in Greece – already deeper and more prolonged than the Great Depression in the U.S. – it would also wreck the credibility of Europe’s common currency, the euro, and put the global economy at risk of contagion.

So far Greece’s creditors have downplayed those risks. In recent years they have repeatedly insisted that European banks and global markets do not face any serious fallout from Greece abandoning the euro, as they have had plenty of time to insulate themselves from such an outcome. But Stiglitz, who served as the chief economist of the World Bank from 1997 to 2000, says no such firewall of protection can exist in a globalized economy, where the connections between events and institutions are often impossible to predict. “We don’t know all the linkings,” he says.

Many countries in Eastern Europe, for instance, are still heavily reliant on Greek banks, and if those banks collapse the European Union faces the risk of a chain reaction of financial turmoil that could easily spread to the rest of the global economy. “There is a lack of transparency in financial markets that makes it impossible to know exactly what the consequences are,” says Stiglitz. “Anybody who says they do obviously doesn’t know what they’re talking about.”

Over the weekend the prospect of Greece abandoning the euro drew closer than ever, as talks between the Greek government and its creditors broke down. Prime Minister Alexis Tsipras, who was elected in January on a promise to end austerity, announced on Saturday that he could not accept the troika’s “insulting” demands for more tax hikes and pension cuts, and he called a referendum for July 5 to let voters decide how the government should handle the negotiations going forward. If a majority of Greeks vote to reject the troika’s terms for continued assistance, Greece could be forced to default on its debt and pull out of the currency union.

Stiglitz sees two possible outcomes to that scenario – neither of them pleasant for the European Union. If the Greek economy recovers after abandoning the euro, it would “certainly increase the impetus for anti-euro politics,” encouraging other struggling economies to drop the common currency and go it alone. If the Greek economy collapses without the euro, “you have on the edge of Europe a failed state,” Stiglitz says. “That’s when the geopolitics become very ugly.”

By providing financial aid, Russia and China would then be able to undermine Greece’s allegiance to the E.U. and its foreign policy decisions, creating what Stiglitz calls “an enemy within.” There is no way to predict the long-term consequences of such a break in the E.U.’s political cohesion, but it would likely be more costly than offering Greece a break on its loans, he says.

“The creditors should admit that the policies that they put forward over the last five years are flawed,” says Stiglitz, a professor at Columbia University. “What they asked for caused a deep depression with long-standing effects, and I don’t think there is any way that Europe’s and Germany’s hands are clean. My own view is that they ought to recognize their complicity and say, ‘Look, the past is the past. We made mistakes. How do we go on from here?’”

The most reasonable solution Stiglitz sees is a write-off of Greece’s debt, or at least a deal that would not require any payments for the next ten or 15 years. In that time, Greece should be given additional aid to jumpstart its economy and return to growth. But the first step would be for the troika to make a painful yet obvious admission: “Austerity hasn’t worked,” Stiglitz says. 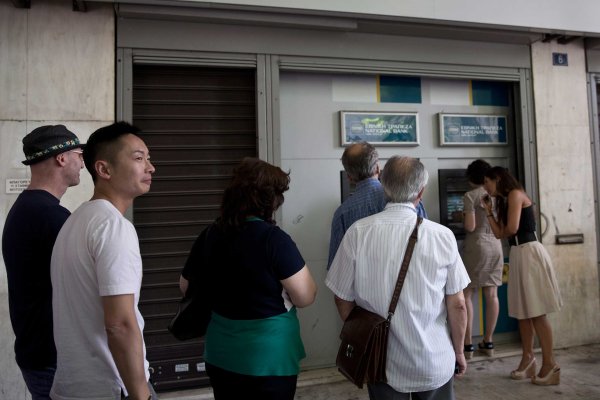 Everything to Know About Greece's Economic Crisis
Next Up: Editor's Pick