Why the Next Gay Rights Push Will Be Different

Sen. Jeff Merkley speaks during a news conference on the Chemical Safety Improvement Act in the Capitol's Senate studio in Washington on May 7, 2015.
Tom Williams—CQ-Roll Call/Getty Images
By Philip Elliott

The Senator leading the push for a comprehensive anti-discrimination bill in Congress tells TIME that he is working with civil rights groups so the coming legislation isn’t just about being gay or lesbian.

Within hours of the Supreme Court’s historic ruling granting same-sex couples the right to marry in every state, Sen. Jeff Merkley of Oregon was laying the groundwork for a sweeping bill that would expand gay rights even further. He says he plans to introduce within the next two months. “We need to put forward a bill that captures that full range. We cannot nibble around the edges,” he said in an interview.

Friday’s ruling, while a tremendous milestone for gay rights, had no effect on what conservative attorney Ted Olson, who argued California’s landmark same-sex marriage case before the Supreme Court, called a “crazy quilt” of laws that unequally treat gays and lesbians.

Indeed, more than 206 million Americans — nearly two thirds of the country — live in states where employers can be fired someone for being gay. Only 18 states and the District of Columbia prohibit housing discrimination based on a tenant’s sexuality or sexual identity. Three others prohibit discrimination based on sexuality. The remaining 166 million Americans live in states where landlords can evict someone for their sexuality.

That’s why Merkley is working with fellow Democratic Sens. Tammy Baldwin of Wisconsin and Cory Booker of New Jersey on the Senate’s version of a sweeping non-discrimination law that would bar individuals from being denied services—including housing and jobs but also mortgages and education—based on their sexuality. In the House, efforts are being led by Rhode Island’s David Cicilline, an openly gay lawmaker, and civil rights icon John Lewis of Georgia.

“Equal dignity involves equal opportunity. It involves equality in the basic functions of our society,” Merkley said. “There should be the ability for the LGBT community to fully participate without discrimination.”

Merkley is also working with a coalition that includes the NAACP, the NAACP Legal Defense and Education Fund and National Council on La Raza. The American Civil Liberties Union, the National Women’s Law Center and the Human Rights Campaign are also lending their advice to Merkley’s drafting process.

“We want to place nondiscrimination for the LBGT community on the same foundation as is anti-discrimination in the Civil Rights Act,” Merkley said.

The politics, however, could be tricky. Neither House Speaker John Boehner nor Senate Leader Mitch McConnell was a fan of earlier gay rights proposals. Yet that was before the Supreme Court decided all Americans have the right to marry. No Republican is yet publicly working with Merkley’s council. 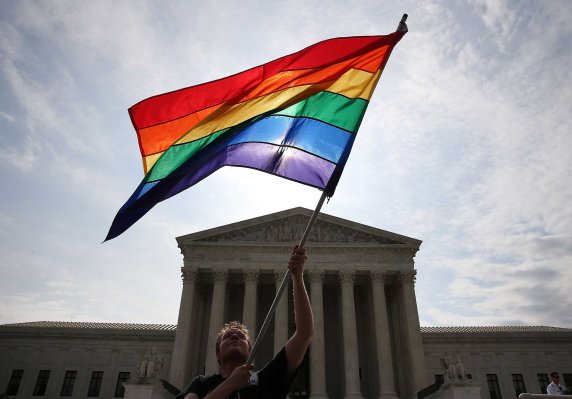 How Gay Marriage Puts Some Gays and Lesbians at Risk
Next Up: Editor's Pick