Chief Justice John G. Roberts poses for a group photograph at the Supreme Court building on Sept. 29, 2009 in Washington DC.
Mark Wilson—Getty Images
Ideas
By Ilya Shapiro
Ilya Shapiro is a senior fellow in constitutional studies at the Cato Institute and editor-in-chief of the Cato Supreme Court Review.

For the second time in three years, Chief Justice John Roberts has saved President Barack Obama’s signature legislation, his eponymous healthcare law that seems to enjoy more legitimacy at the Supreme Court than among the American people. What is going on here? Is the George W. Bush appointee a secret liberal, or at least a jurist who “grew in office” like so many before him?

Actually no, quite the opposite. He’s the epitome of a small-c conservative, meaning that temperamentally and philosophically he works to preserve the status quo and not rock the boat. His mission isn’t to foment a constitutional revolution or expound some jurisprudential theory, but to “call balls and strikes.”

You can see this in his too-smooth background, checking all the right boxes and excelling at the legal craft, but never identifying as an originalist or movement conservative. (For example, he attended the conservative Federalist Society meetings but has said he was never a member.)

You can see this in his minimalism, the hyper-nuanced approach to resolving cases that frustrate those who would rather throw out unconstitutional laws and announce clear principles than tweak them and live to fight another day. (Recall last term’s record unanimity that papered over severe disagreements and generated concurring opinions that were dissents in all but name.)

You can also see it in his incrementalism, striking down laws or regulations only when backed into a corner and nibbling at edge of the law before taking a larger bite. (Think of Citizens United and Shelby County, which came only after narrower rulings on campaign finance and voting rights, respectively, and warned Congress to fix the problem so the court wouldn’t have to.)

This sort of judicial philosophy is really ur-conservatism, in a line of jurisprudence running from Oliver Wendell Holmes through Felix Frankfurter—whom Roberts quoted in Thursday’s King v. Burwell—and Robert Bork. Even Justice Antonin Scalia, nobody’s minimalist and King’s vituperous dissenter, has made his peace with the New Deal’s constitutional warping and refuses to abandon doctrines, like “substantive due process,” that he himself rhetorically assails.

Jurists of this school bend over backwards to uphold legislation, which in recent years we’ve seen not just in the 2012 Obamacare case NFIB v. Sebelius but also the 2005 medical marijuana case Gonzales v. Raich—in which Scalia joined a ruling that allowed the federal government to regulate plants people grow in their own backyards for their own consumption.

And when you merge that instinct with the modern penchant to rewrite laws to make them work better, you get King. As my colleague Roger Pilon put it, with Roberts’s opinion, “we have a perverse blend of the opposing positions of the judicial restraint and activist schools that reigned a few decades ago.” This is the convergence of two unholy strains of judicial agency: liberal activism and conservative pacifism.

Activism, typified by the four Democratic-appointed justices, finds in the Constitution no judicially administrable limits on federal power. Pacifism, a knee-jerk reaction to the activism of the 1960s and ’70s, argues that unelected judges shouldn’t overturn the people’s laws. Neither approach considers that the Constitution’s structural provisions, as well as the standard canons of statutory interpretation, aren’t dry exercises in political or linguistic theory, but a means to protect individual liberty against the concentrated power of popular majorities.

So, to avoid upending Obamacare’s operation as he assumes Congress wanted, Chief Justice John Roberts rewrote three parts of it: turning the individual mandate into a tax, reworking the Medicaid expansion, and now finding that “established by the state” means “established by the federal government.”

As Roberts instructed at the end of his Orwellian King opinion—or perhaps it was Carrollian, with words meaning whatever he says they mean—“in every case we must respect the role of the Legislature, and take care not to undo what it has done.” Ever the good conservative, the chief justice again attempted to show judicial “restraint.”

There’s a lesson here for those who think that being a judicial “umpire” entails making hard calls rather than squinting, kicking home plate a few inches, and inevitably finding that the ball crossed the strike zone. They should insist on engaged, principled judges who defer only to the rule of law. Such nominees might be harder to confirm, but at least it would be worth the effort. 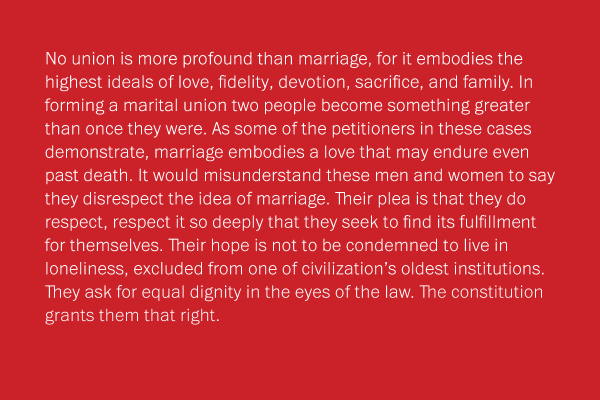 These Are the 141 Words That Just Changed History
Next Up: Editor's Pick