SpaceX on Thursday released new video of an April landing test of the Falcon 9 rocket that nearly ended in success — until it tipped over and exploded.

Unlike previous footage, this video comes from a tracking camera that followed the first stage Falcon 9, or the part of the rocket that detaches from the cargo vessel bound for the International Space Station, according to SpaceX. A rocket’s first stage normally falls back into the ocean — a harmless but expensive loss. If the Falcon 9 could land successfully, it would mark a huge step towards SpaceX’s goal of more efficient spaceflight.

Another landing test is scheduled for June 28 shortly after the Falcon 9 launches at 10:21 a.m. ET from the Cape Canaveral Air Force Station in Florida. The event is subject to weather and other delays. 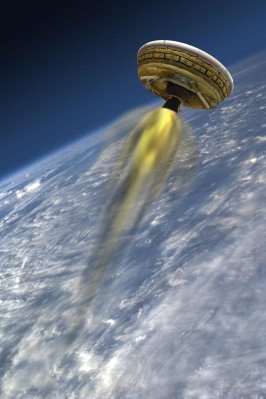 NASA Prepares 'Flying Saucer' for Take Off
Next Up: Editor's Pick