Bill Cosby during an interview in Washington on Nov. 6, 2014.
Evan Vucci—AP
By Eriq Gardner / The Hollywood Reporter

On Wednesday, Bill Cosby told a Pennsylvania judge he’s not a public figure, there’s “no legitimate public interest” in an old sex abuse lawsuit, and confidentiality should be maintained on materials described as posing a “real, specific threat of serious embarrassment.”

This all dates back to a dispute that ended nine years ago. There, the embattled comedian settled a lawsuit brought by Andrea Constand, who was the first woman to publicly come forward with allegations that he drugged and sexually assaulted her. The settlement happened in the midst of discovery as Cosby confronted charges that there were other women who were victims.

After the settlement happened, the Associated Press filed motions to intervene to challenge the sealing of certain motions brought in the case. At the time, the judge agreed with Cosby’s arguments about why various discovery motions — including ones that talked about Cosby’s deposition — shouldn’t be open to the media.

Last December, amid a media frenzy as more women came forward to accuse Cosby of sexual abuse, the AP sent a letter to the court demanding a review of the sealing order under a local rule of civil procedure that presumes an unsealing of records after two years unless the judge dictates otherwise.

That’s led to a new showdown over materials that according to Cosby’s brief on Wednesday, not only includes more about the sexual misconduct allegations, but also issues relating to Cosby’s health, use of prescription drugs, financial affairs and personal relationships.

Cosby’s attorney George Gowen argues there is no public right to access discovery motions and would violate his client’s privacy.

“Moreover, unlike a deposition in a typical case, there is a voracious media appetite for Defendant’s deposition, and public release of it would quickly become widespread public knowledge of it,” states the brief. “There is no doubt that public disclosure of the motions and Defendant’s sworn deposition testimony, which delves into the most intimate subjects imaginable, would generate a firestorm of publicity.”

Although the rules might be set up towards the presumption of public access to judicial records, the brief further argues that he “is not a public official, nor is the relevant information important to public health or safety… Defendant’s status as a well-known comedian and entertainer does not render him a ‘public’ person within the meaning of the law.”

Cosby’s attorney later argues that lifting the seal would undermine the settlement with Constand, interfere with a defamation lawsuit brought against Cosby in Massachusetts, and takes a shot at reporters by saying “the media has had no apparent difficulty flooding the airwaves and press with reports on this story, even without access to the discovery materials. Nor is there any credible argument that public knowledge of the details of those motions will serve some public purpose.”

The AP argues otherwise in its own brief.

“The defendant is the only party who objects to unsealing the record,” writes the wire service. “However, now that the circumstances that he relied upon to gain preliminary sealing in this matter are nothing more than historic references, bypassed by recent public events, the files at issue should be unsealed.”

The judge is asked to consider the fact that Constand is not objecting, the “Jane Doe” accusers in the original suit have publicly come forward, there’s no longer a jury pool to be tainted, and “the Court has already ruled, in accordance with firmly established precedent, that defendant’s fear of embarrassment and humiliation is insufficient to support a finding a good cause.”

The AP adds that Cosby is “unquestionably a public figure” and his conduct “a legitimate matter for public scrutiny.” 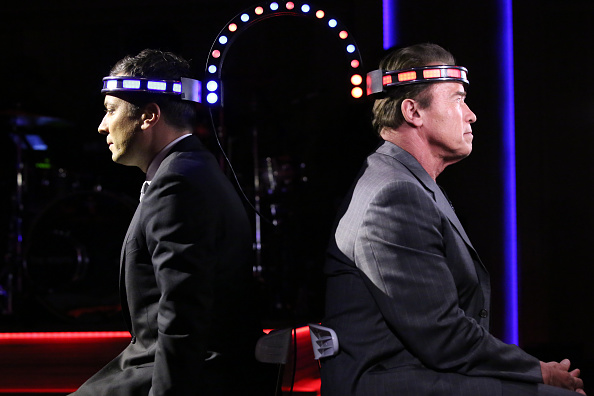 Watch What Happens When Arnold Schwarzenegger and Jimmy Fallon Share a Brain
Next Up: Editor's Pick