Here's How Democratic Presidential Contenders Reacted to the Obamacare Decision

A sign is held up that reads "ACA Is Here To Stay" front of the US Supreme Court after ruling was announced in favor of the Affordable Care Act. June 25, 2015 in Washington, DC.
Mark Wilson—Getty Images
By Sam Frizell

The Democratic presidential candidates were happy with a Supreme Court decision upholding a key part of the Affordable Care Act.

But there were some telling differences in how they expressed that happiness.

Minutes after the ruling came down, frontrunner Hillary Clinton tweeted her support for the high court’s decision.

Clinton, who has long favored reducing the uninsured rate and pushed for an individual mandate during the 2008 primaries, has suggested minor improvements to Obamacare since leaving office as Secretary of State. In a statement on Thursday, Clinton touted the law.

All in all, she takes a similar stance to Obama, and a picture is worth a 1000 words:

Sen. Bernie Sanders of Vermont, a self-proclaimed socialist, has said he views Obamacare as a step in the right direction, but has repeatedly called for a single-payer system in which the government pays for all health care costs, rather than private insurers. It’s a system used by most developed countries, including the United Kingdom, Germany, Canada and the Scandinavian nations.

After the Supreme Court ruling, Sanders nodded at the decision but repeated his call.

Former Maryland Gov. Martin O’Malley praised the Supreme Court decision, but also called for new ways to improve costs. As mayor of Baltimore and governor of Maryland, O’Malley pushed a data-driven approach to cost reduction and management. He doubled down on that wonkiness in his statement. 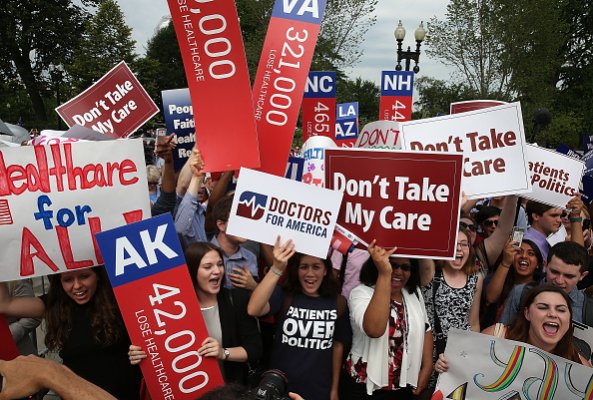 Here's How 2016 Republicans Reacted to the Obamacare Decision
Next Up: Editor's Pick