Schoolgirls admire Tama as the feline sits on a ticket gate at Kishi Station in the city of Kinokawa, in Wakayama prefecture, Japan, on May 22, 2008
Toru Yamanaka—AFP/Getty Images
By Alissa Greenberg

Like many of our most famous and beloved celebrities, she had only one name: Tama, a tortoiseshell renowned for her jaunty hat and cool smirk, was Japan’s most famous (and only) feline train stationmaster. She died Monday at an animal hospital in Wakayama prefecture aged 16, having worked at her post in a converted ticket booth in Kishi Station for almost eight years.

Tama first rose to fame when she was appointed stationmaster at Kishi, a secluded hamlet of at the end of a rail line that had changed hands after closing from disuse, CNN reports. She was whisked away from a simple life at the village grocery store and given a new perch at the station entrance, soon to find herself on posters, T-shirts, stickers and even the center of a themed café.

It didn’t take long for stardom to come knocking. The number of passengers on the train line jumped from 1.92 million in 2005 to 2.27 million in 2014, according to the Japan Times. In fact, the new stationmaster had so many visitors that an Osaka University study estimates that Tama’s popularity added $10 million into the local economy. Many credit her for single-handedly saving both the station and its train line.

Wakayama Governor Yoshinobu Nisaka paid tribute to Tama in a statement to the Japan Times, saying the late stationmaster “contributed greatly to promoting tourism in our prefecture. I am filled with deep sorrow and appreciation.”

Tama is survived by her apprentice, Nitama, who takes her workload of eating, sleeping and upholding the local economy as seriously as her illustrious predecessor. Tama’s funeral will be held at Kishi Station on June 28. 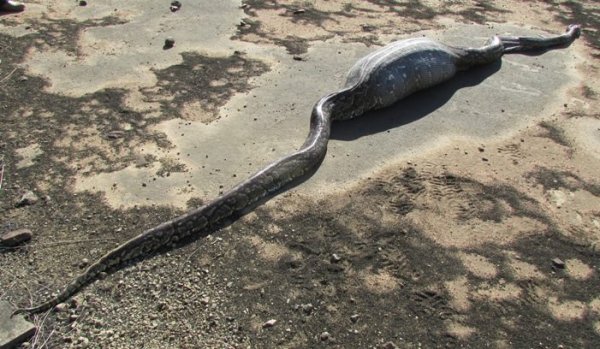 This Is What Happens When a Python Swallows a Porcupine
Next Up: Editor's Pick