A man with his daughter who suffers from dehydration due to extreme weather waits for a medical help outside a ward at a child hospital in Karachi, Pakistan, on June 24, 2015.
Shakil Adil—AP
By Rishi Iyengar

The Pakistan government continued to face the nation’s ire Wednesday over what critics call its inadequate preparation for and response to a devastating heat wave sweeping the southern Sindh province.

Opposition lawmakers slammed Prime Minister Nawaz Sharif’s ruling party in Parliament over the repeated power cuts and water shortages that have considerably worsened the crisis, Pakistan’s Dawn newspaper reported. Many accused the government of “inaction” in the face of hundreds of deaths in the provincial capital, Karachi — the country’s largest city — and its surrounding areas.

“There is a problem of very poor governance, and in normal circumstances it is not so exposed,” Khalid Rahman, director general of the Institute of Policy Studies in Pakistan’s capital Islamabad, says in an interview with TIME. “In this very extraordinary heat wave, it has exposed so many things.”

Over 1,000 people have now died from heatstroke or related medical problems, a majority of them poor and elderly people without access to air-conditioning. The escalating problems from the heat wave prompted the government to declare a public holiday on Wednesday so people could stay indoors, according to the New York Times, and though the resumption of sea breezes from the country’s southern coast contributed to a lowering of the overall temperature and a reduction in the number of fatalities, there are still thousands more undergoing treatment at various hospitals across the region.

The Pakistani army and a paramilitary force, the Rangers, have also stepped in, setting up relief camps for heatstroke patients, while various nongovernment and volunteer organizations have been distributing water and medicine outside hospitals.

“Today was a lot better,” Anwar Kazmi, a spokesman for the Edhi Foundation that runs Karachi’s largest morgue, told the Times on Wednesday. “We’ve had 58 deaths today, compared to yesterday when the death toll rose to 300.”

Khawaja Muhammad Asif, Pakistan’s Water and Power Minister, attempted to deflect the blame from his government and delink the power shortages, which Pakistan has long grappled with, from the heat wave.

“The federal government is not responsible if there is a water shortage in Karachi,” he said in Parliament. “We are ready for accountability, but it’s not appropriate to blame us for each and every thing.”

Rahman, however, says there is a lot the government could have and should have done differently.

“In these days of technology-driven information available well in advance, the government should have come up with an emergency plan as well as some kind of awareness campaign for the public and some emergency centers,” he says. “Unfortunately, despite so many deaths the governments, both provincial as well as federal, did not accept the responsibility. Instead they started blaming each other.” 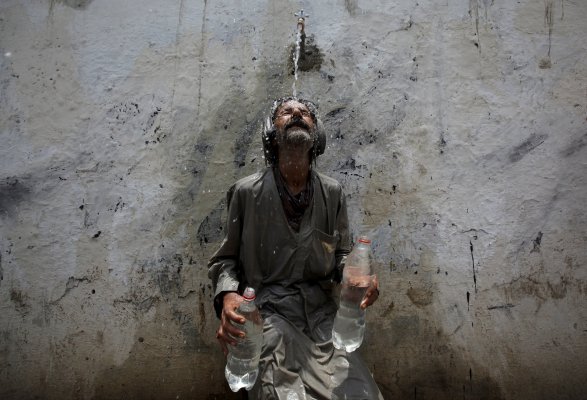 Pakistan Hit by Worst Heat Wave in a Decade
Next Up: Editor's Pick