Visitors pay their respects during an open viewing for Rev. Clementa Pinckney at the South Carolina State House in Columbia, S.C. on June 24, 2015.
Win McNamee—Getty Images
By Julia Zorthian

Hundreds of mourners lined up to view the Rev. Clementa Pinckney’s open casket on Wednesday, under the dome of the South Carolina statehouse, a week after he and eight others were fatally shot at a historic black church in Charleston, S.C.

A horse-drawn carriage and nine state troopers delivered the casket to the statehouse floor, where mourners could file through to pay their respects, the Post and Courier reports. Those who attended were greeted by colleagues of Pinckney, who was the lead pastor of Emanuel African Methodist Episcopal Church and a state senator, as well as his widow and two young daughters.

Pinckney is the first African American to lie in state under the statehouse dome since at least the Reconstruction era, according to the Associated Press. Though a Confederate flag still flies in front of the complex, a black drape had been placed over a second-floor window to prevent mourners from seeing it. 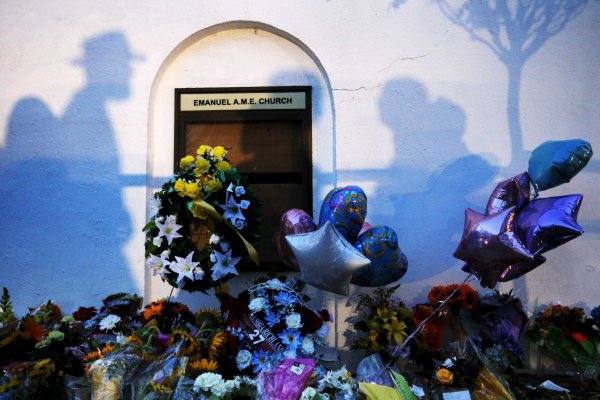