On June 29, 2014, the apparent leader of the Islamic State in Iraq and Greater Syria (ISIS), Abu Bakr al-Baghdadi, declared that he stood at the head of a Caliphate, a Muslim state that spanned Syria and Iraq. He was speaking in the city of Mosul which ISIS forces had taken from the Iraqi army a few weeks earlier. ISIS still hold Mosul and while they have had recent setbacks, on Thursday, they launched fresh assaults on the northern Syrian towns of Kobane and Hassakeh.

One year ago, the success of ISIS seemed to emerge from nowhere, but now we know much more.

Last summer, it seemed like a bunch of fanatical jihadis got together and took swathes of territory from an army the U.S. had spent $25 billion training and equipping. One year later, the roots of the military prowess of ISIS is more clear — Saddam Hussein’s ex-officers form the core of the organisation; as many as 25 of the ISIS leadership previously took orders from the late Iraqi leader.

That means, rather than a disorganized gaggle of theocrats, ISIS is being run by trained military officers with decades of experience, which means they are disciplined and able.

In the last year, ISIS has managed to expand its territory both in Syria and Iraq, despite the U.S.-led coalition’s efforts to contain it. Mosul the largest city taken by ISIS remains firmly under its control despite months of training for Iraqi security forces and numerous dates promised for the operation to retake it.

ISIS’s agility and endless supply of suicide bombers has helped give them the upper hand, says Christopher Harmer, a senior analyst with the Institute for the Study of War, who completed several tours with the U.S. Army in Iraq, but the participation of the members of the old, secular, Baathist regime has been militarily key.

“What ISIS brought to the fight was a bunch of bodies and a willingness to fight, and what the Baathists brought was a knowledge of the terrain and how the Iraqi army would fight…and an understanding of strategic and operational planning,” says Harmer.

He points out that despite having an estimated 25,000 fighters, ISIS has essentially defeated everyone they’ve come up against, though he adds that Kurdish forces as well as Shi’ite militias have managed to win some battles with the organization.

Recent ISIS defeats do not amount to a ‘turning point’

Earlier this month Kurdish-Syrian forces ousted ISIS from the strategic Syrian-Turkish border town of Tel Abyad, and are continuing to push into the Caliphate.

However, this isn’t necessarily a sign of wins to come. When Shi’ite militias and Iraqi security forces finally managed to take Saddam Hussein’s home town of Tikrit from ISIS in March, many were quick to proclaim the victory a ‘turning point’ in the war against ISIS but last month ISIS, rather easily, took Ramadi, the capital of Iraq’s Anbar province and Palmyra in Syria.

As Kenneth M. Pollack, a specialist in Middle East political-military affairs and a former CIA analyst pointed out, “Tikrit was not like Stalingrad.”

If you want to play a game of table football in the Caliphate, you’ll need to behead the players — that’s according to a decree issued by ISIS earlier this year.

“They have to cut of the heads of the figurines or they might resemble idols for worship,” explains Aymenn al-Tamimi, a researcher at the Philadelphia-based think tank Middle East Forum, who has analyzed more than 200 ISIS administrative documents.

From education curriculum and textbooks, to fishing regulations and fines for littering ISIS has laws and by-laws that are more detailed than some recognized states.

Beyond the small stuff, the Caliphate has a structure that mirrors modern states. “Now it’s a lot more like the conventional ministries and state departments you recognize in governments around the world,” says al-Tamimi, adding we have a much clearer idea of ISIS’s government structures than we did a year ago.

These structures include a responsive economic system with multiple sources of income. As the U.S. targets ISIS oil infrastructure making it more difficult to sell the product, ISIS has been raising taxes in parts of the Caliphate, selling antiquities and telling their subjects to stock-up on grain.

Al-Tamimi points out that all this micro-management has helped ISIS maintain control and keep out competing Islamist groups, as well as bringing a “sense of order,”

ISIS will not be simply bombed out of power

Not everyone hates living under ISIS. For some the sense of order is better than the chaos and war that preceded it.

Since President Obama declared war on ISIS last summer, the U.S. has spent nearly $3 billion on thousands of air strikes against the group, but they’ve made only a dent. It’s testament both to ISIS’s military ability but also the need for a political solution. For some, particularly the millions of Iraqi Sunnis who were neglected and marginalized for years by the Shi’ite-lead government in Baghdad, the Caliphate is an improvement.

“The native Sunni populations doesn’t trust the alternative to ISIS,” says Hamid. Until real political moves are made to gain the trust of Sunni populations and tribal leaders, ISIS is likely to maintain a support base despite strict and violent rule.

ISIS represents so much more than terrorism

Part of this failing strategy against the militants might also be that Washington considers ISIS as just another terrorist group. “We saw ISIS as a terrorist organization, but ISIS was never primarily a terrorist organization in the traditional sense of the word,” says Hamid. Unlike groups before them, ISIS prioritized capturing and holding territory, rather than attacking political targets. “The fact that we had this rubric of terrorism I don’t think prepared us for understanding what ISIS was really about and what it was trying to do.”

This territorial expansion and vision that goes far beyond just violence, has also made ISIS the world’s premier jihadi group. ISIS has managed to establish, expand and govern a Caliphate, something Osama bin Laden only talked about.

Another key difference with al-Qaeda; it hasn’t orchestrated terror attacks on the West. Unlike al-Qaeda, ISIS has been putting its efforts into the Caliphate project, maintaining and expanding its borders and trying to solidify its control.

“Al-Qaeda saw one of its primary objectives as provoking the West,” says Hamid. While the American intelligence community has warned that ISIS is a threat to the U.S., the group hasn’t devoted resources to attacks on American soil. However, they have been quick to encourage and congratulate supporters in the West who do so. “ISIS, as an organization, the leadership structure, that’s not what their about, that’s not what they are focused on.”

ISIS has used propagand to shock and entice

ISIS has skilled producers who produce stylish videos of military action and choreographed executions. In their latest polished broadcast ISIS finds new, horrific ways to execute its victims — submerging five men in a cage in a swimming pool and beheading another group with necklaces of explosives.

Since declaring their Caliphate, ISIS has put out dozens of well-produced videos documenting their massacres and atrocities, many featuring Mohammed Emwazi, a British fighter nicknamed Jihadi John who became notorious for beheading kidnapped foreigners.

While this propaganda may have helped attract foreign and local recruits, Hamid points out that the idea of the Caliphate was likely the key to the appeal for many. “I think 99% of Muslims disagree with ISIS’s version of the Caliphate, but the idea of a Caliphate is powerful and will continue to be powerful because it speaks to the weakness of the Muslim world,” says Hamid. “The Caliphate harkens back to a time when Muslim empires were successful and strong in military and economic terms, so it was brilliant marketing.”

As many as 20,000 foreigners have joined ISIS in Iraq and Syria and while some now wish to leave, disillusioned with what they’ve experienced, others continue to make the journey into the Caliphate. 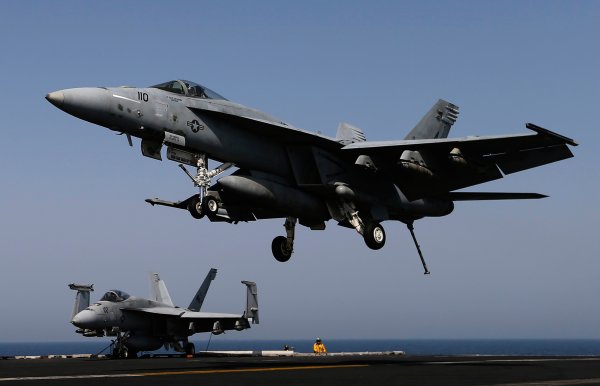 ISIS Had Already Eclipsed Jihadist Believed Killed by U.S
Next Up: Editor's Pick