How NASA Used X-Rays to Pinpoint a Distant Star

A light echo in X-rays detected by NASA’s Chandra X-ray Observatory has provided a rare opportunity to precisely measure the distance to an object on the other side of the Milky Way galaxy.
NASA/CXC/U. Wisconsin/S. Heinz
By Olivier Laurent

By studying these rings, which were captured using NASA’s Chandra X-ray Observatory, astronomers were able to determine how far Circinus X-1, a double star system in the plane of our galaxy, is from Earth.

“It’s really hard to get accurate distance measurements in astronomy and we only have a handful of methods,” says Sebastian Heinz of the University of Wisconsin in Madison, who led the study. “But just as bats use sonar to triangulate their location, we can use the X-rays from Circinus X-1 to figure out exactly where it is.”

The rings are “echoes from a burst of X-rays emitted by Circinus X-1 in late 2013,” the space agency said in a statement. “The burst reflected off intervening clouds of dust, with some reflected X-rays arriving to Earth from different angles at a time delay of about one to three months, creating the observed rings.”

By comparing the Chandra data to prior images of dust clouds detected by the Mopra radio telescope in Australia, and by using simple geometry, NASA says that astronomers were able to determine the distance of Circinus X-1 from Earth. In this case: 30,700 light years. 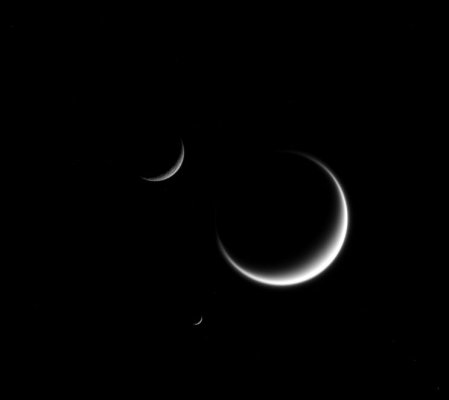 See a Rare Photo of 3 Crescent Moons
Next Up: Editor's Pick