The Bachelorette Recap: Oh My God, They Killed Kaitlyn

Welcome back to The Bachelorette. When we last saw Kaitlyn, she and Ian were getting ready for a showdown in San Antonio. Will he leave in a huff? Or maybe in a minute and a huff? Will he mention the fact that he went to Princeton? So many reasons to watch the show from the edge of your seat.

The Ian Issue: When we last saw Ian, he was telling Kaitlyn that he is not a fan of the fart jokes floating around the house (as if it’s just “jokes” floating around the shared air of the house). Ian expected Kaitlyn to be a brokenhearted damsel still reeling from getting dumped by Chris so he could comfort her. Instead, he gets a girl who likes to laugh and kiss. Kaitlyn is “super offended” by him calling her shallow, surface level and just there to make out. Ian is super offended that she doesn’t recognize his intellect frequently and often (guessing!), so by mutual agreement, Ian leaves. “I’m not lame like the other guys,” he says as he rolls away in the limo, “I’m being punished for being an intellectual.” Don’t worry, he mentioned the fact that he went to Princeton. Maybe they’ll put him on the cover of the alumni magazine.

The Cocktail Party, Continued: In Ian’s Ivy League wake, Nick goes to comfort Kaitlyn. They canoodle on the couch and as the clock ticks, and Nick stays with Kaitlyn, the rest of the men get more and more ticked off. Finally Shawn goes to fight for his face time with his woman, but finds her sucking face with Nick, which turns his stomach (same here, Shawn, same here). While Shawn and Jared make barfy noises, Kaitlyn shrugs. She tells the camera that she thinks intimacy is an important part of a relationship, and if the physical part of the relationship isn’t there, that’s a deal breaker for her. So she’s a make-out bandit, and she just doesn’t care whatever anyone else says about it.

The Rose Ceremony: Chris Harrison finally shows up to talk with Kaitlyn, so she’s not stuck seeking advice from Ashley S. He soon sends her into the Alamo, where they are holding the Rose Ceremony, because the Alamo is a great metaphor for marriage or something. Ben H., Shawn and Nick all have roses already. Kaitlyn gives the first rose to Jared, followed by the Dentist, J.J. (really?), Joe (who looks like the extra roommate on The New Girl), Ben Z., and then she hands the final rose to Tanner. That means the Alamo was the last stand for some guy who looks like he spent too much time studying Steph from Pretty in Pink and for Joe, who not only got sent home, but got sent home with the world’s worst haircut.

On the Road Again: After surviving the Alamo, the roving mating ritual heads to Dublin. Kaitlyn thinks Dublin is a great place to fall in love.

First One-on-One Date: There are four men who have not had a one-on-one date yet, and Kaitlyn chooses to take Nick on the first date. It is the least politically savvy move she could make, and she does it with gusto. Shawn tries to kill Nick with his eyes, but sadly it doesn’t work. Instead Nick and Kaitlyn spend the day wandering the city’s parks, ogling Irish wedding bands, and making out against every wall in Ireland. This would be a good time for ABC to apologize to Ireland for all the cooties. Kaitlyn and Nick make out all through dinner. They whisper, they canoodle, they giggle, they kiss and then Kaitlyn invites him back to her hotel room “to hang out” (which is apparently what the kids are calling it these days). She interviews that when she’s with Nick, she forgets about the cameras and her eight other boyfriends. To prove this point, the producers cut back and forth between Nick and Kaitlyn kissing in her hotel room and Shawn and Jared talking about their feelings for Kaitlyn and their dislike of Nick. Cut to the bedroom door closing on Kaitlyn and Nick, cue the make-out noises. Cut to Shawn saying, “You just got to trust Kaitlyn.”

The Morning After: As the sun rises, Nick heads back to his room. Kaitlyn watches the sun rise over the balcony. She interviews that the “off-camera time with Nick” was unexpected but nice and she doesn’t want it to be an issue. She feels guilty, though, and then asks the off-camera producer, “Has this ever been an issue before?” She wonders, “if Chris and Britt did have sex, what would I have done?” Good question. She interviews that she “doesn’t feel guilty about the act” but about the other relationships. Nick comes in smiling like the cat that just ate the canary and none of the other cats know. Kaitlyn worries that Nick will spill the beans and ruin her other relationships. He talks about his date, mentioning that they went back to her suite, but swears it was just for chatting. Then he throws out the words “intimate” and “personal,” but doesn’t kiss and tell, yet. He’ll save it for the after the Final Rose Ceremony. Kaitlyn starts to regret her choice.

The Weirdest Group Date in Bachelorette History: Tanner, Shawn, the Dentist, Jared and Bens H. and Z. are met by Chris Harrison, who regrets to inform them that Kaitlyn has died. (From guilt, regret, and embarrassment, presumably.) They are tasked with eulogizing her with a traditional Irish wake, complete with poems, songs, Guinness and flowers, which Kaitlyn appreciates from inside a coffin. No, really, she spent the entire date in a coffin, which is the perfect place to repent for her sins. She feels slightly bad about making Ben Z. memorialize her, because his mom just died, and he may not see the humor in the situation, but she makes him do it anyway. Then she makes out with him from the coffin.

The After Party: To celebrate Kaitlyn’s miraculous return from the dead, the gang heads to the Guinness Brewery. She spends some quality time with each of the men (and some Guinness). She and Jared stare at the city, Shawn shows her photos of her family, Ben Z. stares at her with schmoopy eyes. Jared gets the Date Rose throwing Shawn into an existential shame spiral that winds up in a pit of despair of his own making. He does not seem to understand that his girlfriend is dating eight other men.

Bachelorette Milestone: Private concert time. Would any trip to Ireland be complete without an appearance by the Cranberries? Kaitlyn and Jared walk to a church and the Cranberries are there and play “Linger,” even though “Zombie” would be more appropriate, what with Kaitlyn coming back from the dead and all. Best lie of the night: Jared saying the Cranberries were his “favorite band.” That’s just hurting Dave Matthews’ feelings, Jared.

The Cliffhanger: Shawn goes to talk to a producer, because he can’t handle the competition. Kaitlyn told him that he was “The One” and now she’s on a date with Jared. He knows that the Fantasy Suites are coming up and he can’t handle that, saying he’s “about to cry.” He thinks Kaitlyn is “ruining everything” that they have and is “going to ruin it all.” He goes to Kaitlyn’s room to talk, when he really should go talk to a therapist about his anger, jealousy and insecurity issues. When he shows up at her door, Kaitlyn thinks that he knows about Nick. As they settle on the couch to talk (not a euphemism), the producers cut to her in an interview, crying about “a mistake” swearing that she never wanted to hurt anybody.

The Brady and Britt Saga Continues: Britt brings Brady to meet her mom. They’ve been dating for two months. 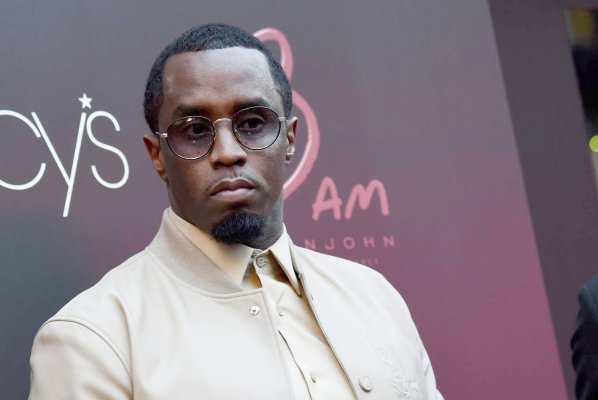 P. Diddy Arrested for Alleged Assault With a Kettlebell
Next Up: Editor's Pick