The 'Next' Seinfeld Has Already Been on TV for a Decade

There is perhaps no journey in the world of television more quixotic than the ceaseless quest to find the so-called “next” Seinfeld. Whether it’s one of the show’s anniversaries or a new series that appears poised to take up the mantle (RIP, Mulaney), there seems to be a never-ending string of catalysts to search for the successor to the ‘Show About Nothing,’ which makes its grand arrival on Hulu on Wednesday.

This search is foolish. It is foolish for a lot of empirical reasons—most notably that searching for the “next” whatever in any medium of art is an inherently pointless exercise—but it’s especially foolish because the show that best fits the ‘next’ Seinfeld mold just wrapped up its 10th hilariously depraved season in February and has been on the air since before Hulu even existed.

When It’s Always Sunny in Philadelphia debuted on FX on Aug. 4, 2005, inheriting the mantle left behind by arguably the most acclaimed sitcom of all time would have been the furthest thing from the mind of creator Rob McElhenney. McElhenney, along with co-stars Glenn Howerton and Charlie Day, had secured Sunny’s series order at FX by shooting an episode on their own cameras for less than $200. The show’s first season featured just seven episodes, lacked any recognizable stars and scored ratings that could generously be described as middling. (Seinfeld also came from rather humble beginnings—it didn’t crack the Top 40 of the Nielsen ratings until its fourth season.) What Sunny had going in its favor was a scathing, confident sense of humor that couldn’t be found anywhere else on television.

Like the Seinfeld gang, the Sunny crew spends its days cooking up schemes and plots that have little hope of panning out. In a Season 9 episode of Seinfeld, the incorrigible George Costanza (Jason Alexander) thinks up a ruse to score himself a private, handicapped bathroom at his office. The episode ends with him being chased down the street in a motorized scooter by a group of cane-wielding octogenarians. When his battery craps out on him, George is forced to pick up his scooter and scurry away—only to run into his boss. In a Season 2 episode of Sunny, Dennis (Howerton) and Dee (Kaitlin Olson) decide to quit working at Paddy’s Pub and go on welfare instead. In a matter of days, they end up addicted to crack and have to grovel for their jobs back. Even though both Seinfeld and Sunny revel in their characters’ depravity, they always make sure that their reprobates get exactly what they deserve in the end.

In a way, it’s hard to believe that Sunny didn’t draw more Seinfeld comparisons in its early years, but perhaps that’s simply because there weren’t enough people watching Sunny to make those comparisons. And, frankly put, people didn’t analyze and discuss TV with the same rigor that they do today. If they had, they likely would have noticed that Sunny took Seinfeld’s “no hugging, no learning” formula, threw it into a blender along with a healthy portion of debauchery and reckless abandon, cranked that blender to “HIGHLY EXCESSIVE” and then consumed enough of the resulting concoction to transform into a sort of sitcom Abomination. It was beautiful.

Seinfeld had been similarly pioneering. When the show arrived on NBC in 1989, it presented a network audience with a group of characters who weren’t anyone’s definition of “good people.” But at least, if the light was dim and you squinted hard enough, you could make out some semblance of redeemable qualities in Jerry, Elaine, George and Kramer. Not so for the gang from Paddy’s Pub. Watching Sunny’s earliest episodes is somewhat jarring because the characters—particularly Sweet Dee—aren’t purely id quite yet. But by the time Frank (Danny DeVito) becomes fully involved after arriving in Season 2, the gang has lost any semblance of self-awareness. The goal wasn’t to see how funny they could be, the goal was to see how depraved they could be and still make you laugh. If Seinfeld personified bold comedy for the ‘Must-See TV’ era, Sunny did the same for television’s ‘Golden Age.’

The differences in prerequisites and presentation between those two eras also help explain why Seinfeld and Sunny aren’t often mentioned in the same breath. The former arrived on a major network with a near-bulletproof comedy pedigree. The latter was one of FX’s first comedies and its creator was a guy who had never written or produced before. Seinfeld was a multi-camera sitcom that preferred to make thinly-veiled references to illicit activities. Sunny was a single-camera comedy that displayed near-unprecedented eagerness to throw innuendo in fans’ faces, repeatedly and without mercy. But perhaps the most inexplicable difference between the two is the fact that in its seven seasons, Seinfeld was nominated for an incredible 68 Emmy Awards; Sunny has garnered just two in its 10 seasons—both for Outstanding Stunt Coordination, which is a little like nominating LeBron James for the Best-Tied Shoelaces Award. (On the other hand, writer David Hornsby did manage to turn the show’s lack of Emmy recognition into Sunny’s best Season 9 episode.)

Regardless of the hardware discrepancy, the two shows share an uncommon lack of reliance on premise. Of course there’s always a premise of some sort in each episode, but for both shows, it’s really just an excuse to have the main characters interact with one another and the boundless collection of weirdos that have a habit of wandering in and out of their lives. And despite a 294 combined episodes for the two series, nothing ever really changed in either one. Other sitcoms have marriages and children and at least some small semblance of growth, but Seinfeld and Sunny instead turned those tropes on their heads, creating long build-ups to nothing. Sure, George got engaged, but Susan was dead before they could tie the knot because she licked too many toxic envelopes. Sweet Dee (Olson Olson) spent an entire season pregnant but the baby disappeared, never too be heard from again, as soon as Olson had the child that compelled the on-screen pregnancy in the first place. Both shows relished an opportunity to paint themselves into an inescapable corner and then wriggle their way out of it in the most absurd way possible.

Now, thanks to Hulu, we all have the opportunity to stop searching for the “next” Seinfeld. We can watch as much of it as we want anytime we like. But if anyone is looking for the evolved version—or, more accurately, devolved version— of the ‘Show About Nothing,’ the It’s Always Sunny in Philadelphia gang has you covered (likely in something incredibly gross). 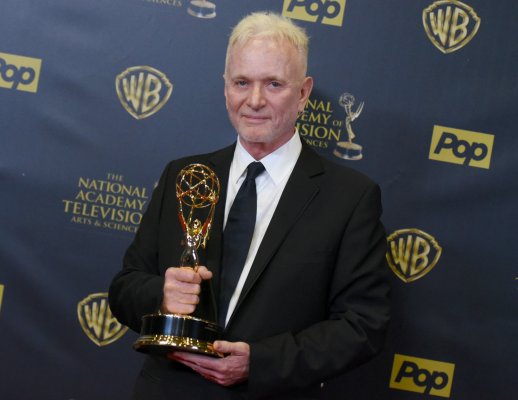 Anthony Geary on Leaving General Hospital: 'This Seems Like the Ideal Time to Go'
Next Up: Editor's Pick