8 Things Inside Out Teaches Viewers About Emotions, Memory and the Mind

Joy and Sadness represent two of the emotions clashing in a little girl’s mind.
Pixar
By Ashley Lee / The Hollywood Reporter

Inside Out has officially become Pixar’s most successful original film — and also the most educational.

The animated blockbuster goes into the mind of an 11-year-old girl named Riley (Kaitlyn Dias) as she moves across the country with her family — and her emotions: Joy (Amy Poehler), Sadness (Phyllis Smith), Fear (Bill Hader), Anger (Lewis Black) and Disgust (Mindy Kaling).

But because writer-director Pete Docter consulted with both renowned psychologist Paul Ekman, noted for his pioneering research on emotions, and Dacher Keltner, co-director of the Greater Good Science Center and psychology professor at the University of California, Berkeley, the tear-jerking film speaks to the head as much as it does to the heart.

The Hollywood Reporter consulted top experts of various disciplines to break down the basic, practical lessons Inside Out teaches regarding emotions, memory and the human mind.

It’s not five basic emotions that actually exist. Though the film characterizes five, Ekman’s foundational research, analyzing facial expressions, noted a sixth universal emotion: surprise. Yet recent studies argue that only four basic emotions exist, regardless of culture and language. “What these studies found is that anger and disgust appeared very similar, as did fear and surprise,” explains psychologist and children’s book author Frank Sileo. “The researchers concluded that the difference between anger and disgust and between surprise and fear were socially, not biologically, based.” And complex emotions are not just simple combinations of the basic ones. “For example, to have embarrassment, guilt, or shame, you need to have certain cognitive skills, including a sense of self that can be judged by others,” says Gail Heyman, psychology professor at the University of California, San Diego, specializing in the development of social cognition during childhood.

That ability to identify and manage emotions is referred to as Emotional Intelligence (EQ), for which, “around the age of two, children start rapidly developing a vocabulary for their feelings,” says child development and parenting expert Denise Daniels, who has created a line of EQ educational products. “It is important to teach children emotional intelligence skills at an early age, so they have the necessary tools to manage the emotional ups and downs of everyday life.”

Yes, an emotion is always (supposed to be) manning the control center. Inside Out puts Joy in charge of Riley by default, but experts note that each person’s natural-born temperament is not necessarily optimistic. And when the “control center” — which the film depicts as a slew of levers and buttons so emotions can dictate behavior — is left unmanned, a person appears apathetic, as Riley momentarily does about the cross-country move. But “apathy isn’t an emotion, it comes from depression or burnt-out feelings that include loss of situational control,” explains psychotherapist and author Emily Roberts. “No one can be apathetic for long. On the outside they may appear apathetic, but inside, there is an internal battle brewing.”

Why all the internal chaos? While Joy and Sadness are lost in other parts of the mind, Fear, Anger and Disgust are in a state of panic — an appropriate depiction of what can happen during a traumatic experience or a major life event, to children and adults alike. Such memories “can actually require more time to identify mixed emotions, process the experience and store a memory,” says Fran Walfish, child and relationship psychotherapist and The Self-Aware Parentauthor. “Sometimes, we must go through a myriad of emotions until we land in a place of resolution where we properly associate the memory.”

Memories aren’t necessarily accurate. The movie introduces the overnight process of memory consolidation, which converts short-term memories collected each day into long-term memories, stored within Riley’s colorful and confusing maze. But when memories are retrieved and remembered, the emotions associated with them can change, as when Sadness turns a gold-colored, joyful memory into a blue-hued one. Though memories may feel completely true and accurate, “on the question of whether we can ever trust our memories: we can — just not 100 percent, because memory is in fact malleable,” says John Wixted, psychology professor at the University of California, San Diego, specializing in memory.

Memories are never fully deleted. The job of the film’s “forgetters” (voiced by Bobby Moynihan and Paula Poundstone) is to “vacuum” gray-colored, relatively useless memories, like trivial facts or outdated knowledge. However, they’re never completely gone, but just piling up in a dump area of Riley’s brain. “Old memories that are not connected with emotions are less likely to stick around,” says psychotherapist Judy Rosenberg. Even more, “events plus emotions lock in memories.”

Scary thoughts are (somewhat) hiding together. At one point, Joy and Sadness wander into a dark cave that houses Riley’s most fearful figures. While the brain doesn’t necessarily store these scary memories that way, the amygdala houses their emotional attributes. “Without the amygdala, we’d remember the event, but it wouldn’t be remembered as having been scary (except in an abstract intellectual sense),” explains Wixted.

Instead, what might be depicted is an area of repressed memories. “When a traumatic thought is overwhelming, we ‘repress’ that thought, meaning we may it unconsciously as a way to cope with feeling overwhelmed,” says Gail Saltz, clinical associate professor of psychiatry at Cornell University. “It then seems as though the thought is no longer there. It is, but not consciously available to us. Certain experiences may trigger that memory and cause it to be made conscious again.” Further, “repression can create emotional problems that are unidentified, because the person forgets the cause, which was repressed,” adds behavioral psychologist Gail Gross.

Personality islands can never truly fall away. The film introduces the concept of a “core memory” from “a super important time in her life” that powers Riley’s various personality traits, and that because of her experiences, she loves hockey and values friendship, and is honest, humorous and close to her family. Such an illustration is based on the concept of the “core self” and “core beliefs” that shapes a personality. These resulting traits “can evolve or fade away over time, but they are always part of you, whether you like them or not,” says Roberts. Heyman adds, “Memories can also shape people’s preferences and beliefs in meaningful ways, but often the effect is indirect. For example, a memory might shape your subsequent behavior, which can then shape the experiences you have that influence your development.”

Inside Out is just the beginning. Riley is only eleven years old in the film, leaving plenty of potential material for a sequel. “Hormones should be a character because they hijack emotions!” says Roberts of adolescence, since it’s a time when the brain grows key components that cause mood swings, irritability and sexual interest. “Adolescents’ brains have increased activity in the amygdala that makes teens more prone to risk-taking and seeking pleasurable experiences, and at the same time, their frontal lobe — which houses judgment and the concept of consequences — is not fully developed,” notes Saltz. “Therefore, teens are more apt to feel intensely and take risks without considering consequences.”

‘Inside Out’ Editor Reveals Pixar’s Secret to Making Moviegoers Cry

‘Inside Out’ Cast Reflects on Most Valuable Thing About Childhood

Cannes: John Lasseter Calls ‘Inside Out’ Cast “One of the Most Talented” in Pixar History 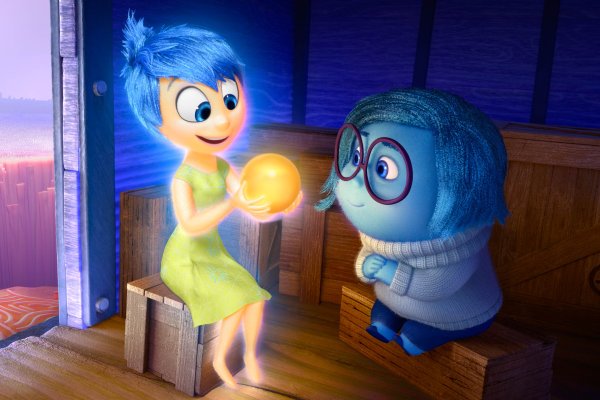 Why It Matters That Inside Out's Protagonist Is a Girl
Next Up: Editor's Pick