Animal lover Yang Xiaoyun, left, uses a mobile phone next to a cage containing dogs that she bought from dog vendors to rescue them from dog-meat dealers ahead of a dog-meat festival in the Chinese city of Yulin, Guangxi province, on June 21, 2015
Kim Kyung Hoon—Reuters
By Helen Regan

A woman in China reportedly paid over $1,000 Saturday to save 100 dogs from being killed and eaten during a dog-meat festival in the southern city of Yulin.

The festival, which occurs annually during the summer solstice, has faced increasing backlash from activists who say the event is cruel, reports Agence France-Presse.

Yang Xiaoyun, 65, was seen in photographs browsing through a market where dogs were kept in cages, before paying about $1,100 to rescue scores of canines.

In the past, animal-rights activists have traveled to Yulin to demonstrate against the festival and have been known to buy dogs to save them from being eaten.

According to Hong Kong–based charity Animals Asia, the majority of dog meat in China comes from stolen pets and strays.

The group says many of the dogs are treated inhumanely, kept in tiny cages and poisoned or beaten to death. Nevertheless, eating dogs is legal in the country.

This year, animal lovers including British comedian Ricky Gervais are decrying the festival under the hashtag #StopYulin2015.

Warning: Some viewers may find the contents of the video distressing. 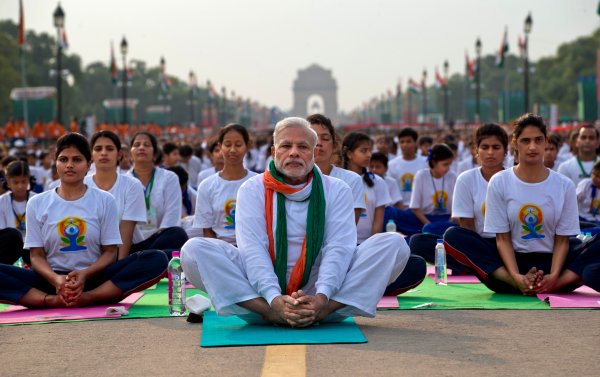 See Photos From the World's First International Day of Yoga
Next Up: Editor's Pick