Kareem Abdul-Jabbar: It's Media Terrorism to Deny Charleston Was About Race

The steeple of Emanuel African Methodist Episcopal Church stands as a pedestrian passes early June 21, 2015, in Charleston, S.C.
David Goldman—AP
Ideas
By Kareem Abdul-Jabbar
Abdul-Jabbar is a six-time NBA champion and league Most Valuable Player. He is the author of the new book, Writings on the Wall.

Stop me if you’ve heard this before: A man walks into a crowded room… and shoots a bunch of people. Yeah, you’ve heard it before. Get used to it, because statistics suggest you’ll be hearing it a lot more. According to a study by Harvard and Northeastern University researchers, from 1982 to 2011, a mass shooting occurred an average of every 200 days; since 2011, mass shootings happened an average of every 64 days. Each time it happens, politicians and commentators immediately rush into to announce the social significance of the tragedy. And sometimes, these commentaries can be more harmful than the actual shootings because of their long-term effect, to the point of creating even more widespread damage to the community.

There’s a lot of debate about whether or not this was a terrorist act. Terrorism is a political tool that has a specific goal. Terrorists in Iraq and Afghanistan want to drive Americans out of their countries. Terrorists in other countries do it for the same reason: to gain political power. After an hour at the prayer meeting, Dylann Roof stood up and proclaimed that he was there “to shoot black people.” His rambling manifesto during the shootings was: “You rape our women, and you’re taking over our country. And you have to go.” In his mind he was a terrorist, but in reality this was nothing more than hate crime using terrorist tactics to enact his racist fantasy. Roof had no hope of driving African Americans out of the country, starting a race war or engendering any political or social change at all. We shouldn’t use it as an excuse to discuss terrorism because that diverts us from the actual problem.

The real threat here isn’t that this is an indicator of an surge in right-wing racist attacks, it’s that we allow this incident to be used as a political football by those who hope to leverage it to their gain, which is a more subtle form of terrorism: media terrorism.

First, those politicians and pundits who call this an attack not against blacks, but against Christianity or faith, demonstrate the shoddiest excuse for journalism and the most corrupt exercise of politics. GOP presidential candidate Rick Santorum called the shootings an “assault on religious liberty.” Former New York City mayor Rudy Giuliani opined, “Maybe he hates Christian churches.” Fox News referred to it as an “attack on faith.” Presidential hopeful Rick Perry used the shooting to attack President Obama’s call for more gun control. Presidential candidate Rand Paul commented, “You can be a minority because of the color of your skin — or the shade of your ideology.” Presidential candidate Lindsey Graham, and senator of the state where the shootings took place, commented: “It’s 2015, there are people out there looking for Christians to kill them.”

Those who refute the clear racial element in these attacks are like Holocaust deniers who say there were no gas chambers, no mass genocide, that the world is just conspiring against the poor misunderstood Nazis. Slavery was America’s Black Holocaust. There were over 10 million slaves in the U.S. between 1525 and 1866, and they were systematically stripped of their identities, dignity, human rights, and far too often, their lives. Yes, that’s ancient history and Americans today should in no way be blamed for the misdeeds of their ancestors. But the hard truth that deniers wish to avoid is that the residual effects of that slavery, abolished 150 years ago, still permeates society. Statistics prove that, despite enormous gains and sincere efforts by many in the white and black communities, African Americans are still struggling to gain economic, educational, and judicial parity. As long as we admit the problem, we have a chance of eventually fixing it.

So why this persistent denying of a lingering racist undercurrent in America? Political gain. By convincing Americans that racism doesn’t exist, politicians are able to divert funds from programs that combat racism and create equal opportunities for everyone to other projects that would most benefit their political power base. We’ve seen this Ministry of Misinformation in action before. In China, the government has removed all mention of the 1989 protest at Tiananmen Square that resulted in the massacre of thousands of people. On Thursday, The Wall Street Journal announced, “Today the system and philosophy of institutionalized racism identified by Dr. King no longer exists.” Donald Rumsfeld is taking another That Never Happened tour, telling us he never thought we could bring democracy to Iraq, despite the endless film of him telling the American people the opposite. They are rewriting history to suit their needs. However, the racism deniers following the Charleston shootings are trying to rewrite history as it’s happening, which is even more insidious.

The result of all this denying is to give tacit approval to continue victimizing certain groups. When those in power argue against fighting for rights for blacks, gays, women, or any other group seeking equal treatment under the law, they are announcing with a wink that these groups somehow don’t deserve those rights. If they don’t deserve equal treatment, then they aren’t equal as people and can be victimized. When presidential candidate Donald Trump refers to Mexican immigrants as mostly drug dealers and rapists, he’s encouraging Americans to victimize them. Nothing says we don’t give a crap about black history more emphatically than flying a Confederate flag, as it does in South Carolina’s capitol, enforced by state law. To claim it’s there to honor the state’s past is like Germany hoisting the swastika above a synagogue to honor its past of making Volkswagens. Whatever Roof’s motivations—be they drug-induced or ideological—he chose to attack a group that to his twisted mind seemed reasonable because they are already a victimized group.

Public perception, not reality, drives political change. In 2014, crime statistics were at a 20-year low, yet most Americans (63%) thought crime was on the rise. Clearly, the increased reporting of violent crimes on TV and the scare-rhetoric of some politicians and news commentators helped mold that perception. Whether intentional or not, that perception drove gun sales up and lowered public support for gun control laws. Profits and political power were made on the back of misperception, not truth. The same misperception occurs regarding Islamic terrorists in the U.S. Since 9/11, an average of nine Muslims have contributed to six terrorism plots a year. The result over those years has been 50 deaths. However, during that same time, according to a study conducted by Professor Arie Perliger at the U.S. Military Academy’s Combating Terrorism Center, right-wing extremists conducted 337 attacks each year and were responsible for 254 deaths. But if a government agency wants public support for privacy-invading laws or massive funding, the imminent threat of Muslim terrorists is bandied about because they are on the unofficial Go Ahead and Victimize list. And so it continues with the rush to Jedi mind-trick us into not seeing what is clearly in fronts of us: “This is not the racist you’re looking for.”

Poet Charles Baudelaire once wrote that “The Devil’s best trick is to persuade you that he doesn’t exist.” In this case, the pundit’s and politician’s best trick is to persuade us that racism doesn’t exist so that it can continue to flourish among those who they don’t care about anyway. They dismiss the black community’s concerns, mock them with a symbol of their former oppression, and reduce their hope for meaningful change. Not that far from slavery after all. Yes, Christianity and faith are indeed under attack, not by terrorists, but by these same politicians who fail to demonstrate the teachings of their faith. When young people see such hypocrisy in the name of faith, of course they turn away.

The greatest endorsement of faith came, not from the politicians scurrying for votes off the back of this tragedy, but from the families of the victims who faced the murderer with Christian charity and forgiveness. “You took something very precious away from me. I will never talk to her again. I will never get to hold her again,” said the daughter of shooting victim Ethel Lee Lance. “But I forgive you.” Family member after family member faced Dylann Roof in court and forgave him. That is faith in action, not just the empty words of a vote-grubbing succubus.

Still, there must be accountability and consequences for one’s actions. Dylann Roof may be forgiven his trespasses, but he must still be punished. The same should be said of the pundits and politicians who have cynically, some would say immorally, exploited this tragedy for political gain. When it comes election time, let’s remember their attack on the truth.

Correction: The original version of this article misstated Lindsey Graham’s office. He is a senator from South Carolina. 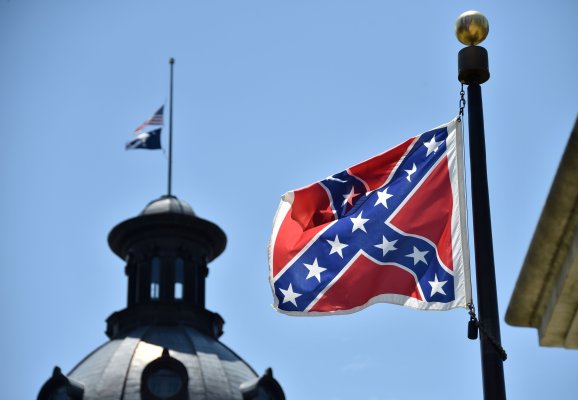 The Confederate Flag In Every State, In Every Form, Must Come Down
Next Up: Editor's Pick