Privately-run prisons in the U.S. have become an increasingly popular way for states to cut costs, but a recent study finds that inmates actually stay longer in private prisons than in state-run correctional facilities.

A study by Wisconsin School of Business assistant professor Anita Mukherjee found that inmates held in private prisons in Mississippi from 1996 to 2004 served 4% to 7% longer than inmates serving similar sentences in public prisons. Mukherjee’s study, which is currently under review, appears to be the first to compare time served between public and private prisons.

The U.S. private prison industry is thought to be worth $5 billion a year, with facilities increasingly used by cash-strapped states dealing with overcrowded public prisons. In Mississippi for example, whose 20,000-strong prison population gives it one of the highest incarceration rates in the country, about 40% of inmates are housed in private prisons.

While it makes financial sense for a private prison to hold inmates for as long as possible, Mukherjee says the main reason behind the trend is more complicated than a privately run facility merely attempting to lengthen an inmate’s stay.

Parole boards, rather than the prisons themselves, are the ones that decide whether a prisoner should be released early. Mukherjee argues that private prisons do whatever they can to cut costs, including hiring less experienced guards that work for less pay and have high turnover.

Those inexperienced guards may be more inclined to hand out violations to inmates, she says, which is often the easiest way to maintain authority. Mukherjee found that inmates in private prisons were 15% more likely to get an infraction. And it’s those violations that a parole board looks at when deciding whether to release an inmate early based on good behavior.

Mukherjee says that the inmates in private prisons she studied received more infractions than those in public prisons, even though the parole board is the same for all state prisons. “Because they know they can’t just keep inmates longer, private prisons may be focusing on making it cheaper,” Mukherjee says. “And there are unintended consequences from that.” 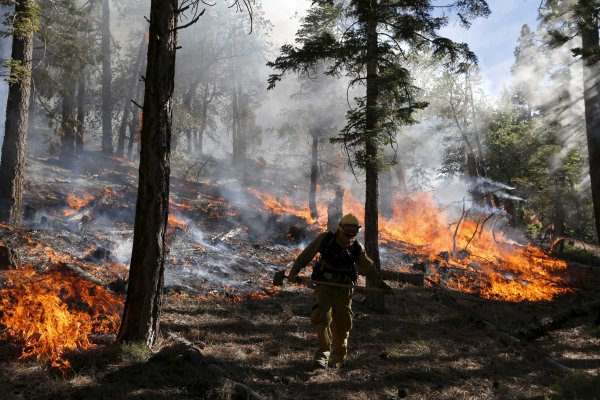 Year's Biggest Wildfire Spreads in California
Next Up: Editor's Pick