Brian Williams Admits, 'I Told Stories That Were Wrong'

Brian Williams’ interview with Today’s Matt Lauer was a tale of two words: one he wouldn’t say (“lies”) and one he used repeatedly (“ego”).

NBC announced Thursday that the former Nightly News anchor and managing editor has officially lost his chair to Lester Holt, and will become a breaking news anchor for MSNBC. Williams followed the news on Friday with an interview with Matt Lauer, which ran in part on the Today show with more to come on Nightly News. While Lauer pressed him to admit to the public that he had knowingly lied about his experiences (most famously the helicopter incident in Iraq in 2003), Williams couldn’t bring himself to use the L-word, instead saying phrases like “I said things that were wrong” and “I said things that weren’t true.”

NBC conducted an internal investigation on Williams after the uproar over the Iraq exaggeration, and reportedly found 10 to 12 other incidents where he had stretched the truth, usually not in the anchor chair but at extracurricular events like late-night talk show appearances and public speeches. After reviewing the findings, Williams said: “It had to have been ego that made me think I had to be sharper, funnier, quicker than anybody else. Put myself closer to the action, having been at the action in the beginning.”

Williams emphasized several times that it was not his intent to willingly mislead people, offering as an explanation, “this came from clearly a bad place, a bad urge inside me.” Now he says he wants to be held to a harsher standard than ever to win back his viewers’ trust.

On his move to MSNBC, Williams said, “Was it my first choice? No. Obviously I wanted to return to my old job. I thought we had had a great 10-year run.” But he’s “very happy” to be returning to work in a breaking news capacity, reporting on the kinds of stories where “you can feel people tuning in.”

On the promotion of Lester Holt, Williams said, “No one is more deserving.” 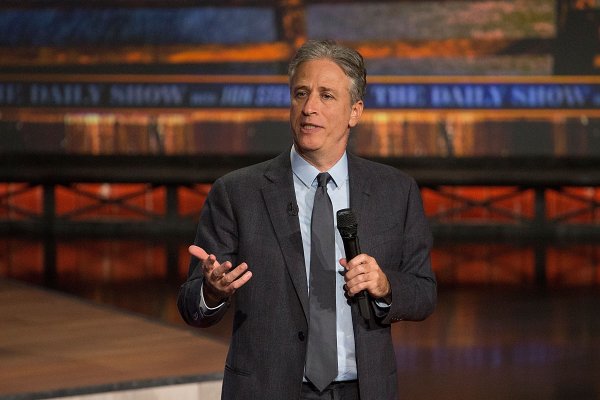 Jon Stewart Tells No Jokes About Charleston Shooting
Next Up: Editor's Pick