Todd Frady, left, and Debbie Dills of Frady's Florist in Kings Mountain, N.C., pose for a photo after Dills called in the tip that ultimately led to the arrest of Dylann Storm Roof, on June 18, 2015
Gabe Whisnant—AP
By Alissa Greenberg

After a tragic night and a tense 14-hour search, alleged Charleston shooter Dylann Roof was taken into custody Thursday in Shelby, N.C., nearly 250 miles away from the city where police say he killed nine people during a prayer meeting.

But the 21-year-old was only apprehended thanks to a tip from local florist Debbie Dills, who spotted a car matching the description released by police as she drove to work on Thursday, CNN reports.

“I saw the pictures of him with the bowl cut,” Dills told the Shelby Star. “I said, ‘I’ve seen that car for some reason.’ I look over, and it’s got a South Carolina tag on it.”

She told the paper she was convinced the car was just a lookalike until she saw the driver’s haircut. That was when she called her boss, Todd Frady, for support. He contacted the local police and remained on the phone with Dills as she trailed the car, hoping to confirm the license plate was a match. Once she had verified the plate number at a stoplight, the police arrived within minutes.

Dills is the minister of music at the West Cramerton Baptist Church and told the Star she had been praying for the victims in Charleston. “Those people were in their church just trying to learn the word of God,” she said.

She gave credit to a higher power for her role in the arrest. “It was God that made this happen,” she told CNN. “It don’t have nothing to do with Debbie. It don’t have nothing to do with Todd. It was all about Him. He made this happen. He answered the prayers of those people that were praying in Charleston last night, that were in those circles praying. God heard the prayers of the people and he just used us as vessels to get his work done.” 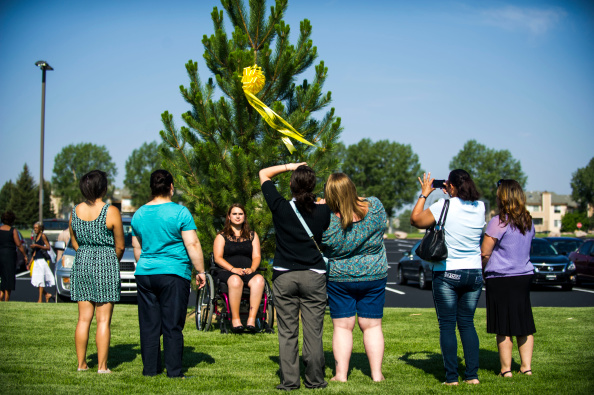 Jury Will See Picture of Youngest Aurora Victim
Next Up: Editor's Pick