Don Winslow never intended to write a follow-up book to his 2005 novel The Power of the Dog. It was a brutal story about the war on drugs—one famous incident involved a man throwing two children off a bridge—and he didn’t want to revisit that subject matter. When people suggested he write a sequel, he says he would hang up the phone or storm out of the room. “I did not want to write this book,” Winslow says.

The Cartel, out Tuesday, is that book—the one Winslow so vehemently resisted writing. He thought he had already seen the worst of the war on drugs, but as news reports kept trickling in, he saw the violence “accelerate to points you had literally not thought humanly possible,” he says. Though the book is a sequel, readers need not be familiar with the backstory between a major Mexican drug king and the DEA agent intent on taking him down to appreciate the new volume.

TIME caught up with Winslow ahead of the book’s release to talk about the novel and how to fix some of the problems endemic to the war on drugs.

TIME: What was your research process like for this book?

Winslow: I’ve spent close to 10 years on researching and writing these two books. So the process is complicated. I start with the basics, start doing a lot of deep research, historical research. Once I felt that I had some background, then it was a matter of talking to people.

Who did you start speaking to first?

Cops. Who, as you might know, are not always the easiest interview. I did talk to, of course, drug people.

How did you find them? Through the cops?

Where would you have these conversations?

How long would you spend with any given source?

It varies, from minutes to days. Some of these relationships have gone over the course of years.

And some people you returned to for the second book?

A lot of people were dead.

Wow. How did you learn of their deaths?

How closely do some of the story lines mirror real-life events?

The incidents are very real. I can’t think of anything [invented], really, in Cartel, except maybe the very ending. If you’re familiar with the Mexican drug scene, the Mexican drug history—and not many people are—you can recognize some of the prototypes for the characters based on their actions. But in terms of their personalities, or their more private lives, that’s made up.

Was there one news incident that tipped the scales to make you want to write a second book?

I don’t know if there was a moment where I felt, “Okay, I’m writing this book.” But there’s an incident in the book about the slaughter of a bunch of Central American immigrants. Unfortunately, there were numbers of those. I had already started researching it, obviously, all the while denying I was actually going to write it. Just thinking, “Well I’m interested in it, and it’s the responsible thing to do to follow the news.” And I live near the border.

Where do you live?

Southern California, San Diego County. Way out in the boonies. The Border Patrol used to chase people through the back of our property. We live in an old ranch, and I’d be out walking in the back, checking fences, and I’d find immigrant camps. So we were in the heart of it.

A conversation in the news lately is about how shows like Game of Thrones, Breaking Bad, The Sopranos, can be criticized for depicting violence in a way that idealizes it. At the same time, if you’re going to tell a violent story, you need the readers to root for the characters enough to stay with the story. How did you try to straddle that?

It’s so tricky. In Dog, I wrote about, for instance, a guy who throws two little children off a bridge. I struggled with that. How do you write it? You want it to be real, you want it to be impactful. At the same time, you don’t want to cross the line into the pornography of violence, the sheer voyeurism. You have to make some choices. I don’t like, in crime novels or in film, the sanitation of violence. If you’ve ever seen somebody shot, and I have, it’s not pretty. It never happens in slow motion. It’s sickeningly quick and irrevocable. So I’ve never liked crime murder as a parlor game. If you’re going to let a reader know what it’s like, and what the real-life consequence of this stupid, insane war on drugs is, and the real-life consequences of buying drugs, I think you need to make it realistic and brutal. At the same time there are some things I won’t do.

What are the things you won’t do?

I won’t do a rape scene. I’ll refer to it, but I can’t write it. I can’t do it. I was one of the people who was angry about Game of Thrones a couple weeks ago. You could have cut away from that scene, or he walks out the door. I won’t do that. There are rapes in this book, and they’re referred to.

How do you see the role of women in the novel and in the war on drugs?

It’s changed a lot. When I was writing Dog, the women were accessories. They were on the guys’ arms, they were hookers. But there were several developments that changed that. One was that the men killed each other off. So in some of these cartels, the sister might be the last surviving sibling. To protect herself and to protect her family, she has to take authority, because if she yields authority they’ll kill her just to make sure. So more women started to rise through the system.

The other story that boggles my mind is the women’s revolution, especially but not exclusively in northern Mexico, where these women—I have no way of explaining this level of courage—say, “Okay, we don’t have any police left. They’re all dead or they ran away. I’m gonna be the cop.” With the full knowledge that their predecessors were killed, and the knowledge that they are probably going to be killed.

I read that you said the answer to the war on drugs is that drugs should be free and no one should use them. Could you expand on that?

It’s the illegality of drugs that puts the profit into them, and it’s that profit that drives the violent psychopaths of the cartels to the extent where 100,000 people in Mexico have been murdered and another 22,000 are missing—and those are obviously round figures.

So here’s the problem: people go out and they go to a party, or they come home and they do whatever, and they have some weed. Per se, it’s not an issue. But you have to realize that there’s a big possibility that it has blood all over it: of children, of women, not just gangsters killing gangsters, innocent people, most of them poor. Addicts are of course a whole different story, but recreational drugs, I’m sorry, I think it’s wrong.

But legalization would be a huge step forward. At least decriminalization. We’re the largest drug market in the world, so we spend billions of dollars buying the drugs and billions of dollars trying to keep the drugs out. Let’s spend these billions of dollars addressing the roots of the drug problem—poverty, racism, bad education, isolation, all kinds of things that we as a society could take this money that we’re wasting and use it to that end. 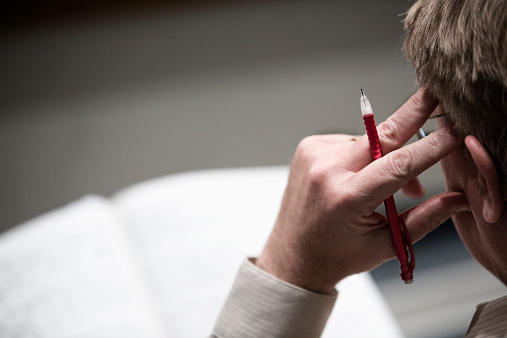 Why You Should Write in Your Books
Next Up: Editor's Pick