The letter—named Laudato Si’ or “Praise Be to You,” quoting a song to nature that Saint Francis wrote 800 years ago—is a powerful, prophetic, and personal plea for governments, religions, businesses and individuals to work together to address climate change, much of which Francis says is caused by humans.

Technically this is Pope Francis’ second encyclical—he completed Pope Benedict XVI’s Lumen Fidei, “The Light of Faith,” in June 2013 not long after he was elected. But it is the first one that is solely his, and its significance as a window into Francis’ thoughts and where he hopes to take the Catholic Church cannot be overstated.

Of all of Francis’ careful moves, this one is particularly calculated. It is difficult to imagine the topic was not in his long-term vision the moment he stepped onto the papal balcony to greet the world for the first time in 2013 and announced his name. His chosen namesake, Saint Francis, is not just the protector of the poor—he is also the patron saint of the environment. That foresight continued as the nearly 200-page encyclical was drafted over the past year. Now, the letter launches in time to frame his September visit to the United Nations, and it sets a moral framework for the U.N’s Conference on Climate Change in Paris, which begins in November.

Francis’ vision for change is comprehensive. He addresses the challenges of food production due to uncontrolled fishing. He reminds readers that migrants are forced to flee poverty induced by environmental degradation but are not recognized internationally as refugees. He offers a corrective to past theological interpretations that say that God gave humanity dominion over the earth and challenges the idea that humanity should be the center of concern when it comes to the Earth’s future. He calls out the failures big business, politicians, and international summits.

“It is remarkable how weak international political responses have been,” he writes. “Consequently the most one can expect is superficial rhetoric, sporadic acts of philanthropy and perfunctory expressions of concern for the environment, whereas any genuine attempt by groups within society to introduce change is viewed as a nuisance based on romantic illusions or an obstacle to be circumvented.”

At every point the encyclical gives insight into the kind of leader Francis has chosen to be. Its first sentence connects the Earth with feminine imagery—“Saint Francis of Assisi reminds us that our common home is like a sister with whom we share our life and a beautiful mother who opens her arms to embrace us”—an effort to elevate the place of women in church life. He takes care to build his argument from the work of Catholic bishops in nearly two dozen countries, most in the global South and developing nations, including references to bishops in the Philippines, Bolivia, Argentina, Japan and Southern Africa, which covers Botswana, South Africa and Swaziland.

Francis builds his theological argument from the ground up, not just relying on historic church teachings, but also naming practical realities like the challenges of small farmers who, when forced out by large GMO-producers, often turn to poverty-stricken urban areas. He is tuned to detail—everything from the importance of urban planning to improve quality of life to addressing the pollution that arises from traffic congestion. Protecting the least of these for Francis is about more than protecting poor or marginalized humans—as he explains, it includes protecting plankton in the ocean’s food chain and worms in threatened ecosystems.

Through it all Francis, yet again, shows himself to be a personal leader. His writing is simple and clear. He frequently uses the pronoun “me.” He speaks directly, using images that everyday people can understand—he speaks of carpooling, recycling, and turning off lights; of excessive air-conditioning use and waste of discarded food while others starve. He begins with a personal plea, “My Appeal,” as he puts it, for change—“Regrettably, many efforts to seek concrete solutions to the environmental crisis have proved ineffective, not only because of powerful opposition but also because of a more general lack of interest,” he writes. “Obstructionist attitudes, even on the part of believers, can range from denial of the problem to indifference, nonchalant resignation or blind confidence in technical solutions.” And, he concludes with two prayers—one for Christians and another that believers of all faiths can share.

His vision is not just Catholic, but global, ecumenical and interfaith. The Vatican made the encyclical available online in Italian, French, English, German, Spanish, Portuguese, Polish and—for the first time on an encyclical release day—Arabic. A Vatican press conference on the formal encyclical release Thursday morning featured world leaders, including Ghanaian Cardinal Peter Kodwo Appiah Turkson, president of the Pontifical Council for Justice and Peace; Metropolitan John Zizioulas of Pergamon, representing the Ecumenical Patriarchate and the Orthodox Church; John Schellnhuber, founding director of the Potsdam Institute for Climate Impact Research in Germany; and Carolyn Woo, president of Catholic Relief Services and formerly of the University of Notre Dame. It is also the first time that a representative of the Orthodox Church—which first splintered from the Catholic Church in the fifth century—will be participating in such a high-profile way for an encyclical release.

Openness to conversation is a hallmark of Francis’ Jesuit training—being open to growth and listening to other points of view—and it is a model of leadership he showed during the Extraordinary Synod on the family last October, where he stressed that openness in dialogue was key to moving any issue forward. Part of the wisdom in Francis’ leadership is that he is not afraid that people will disagree with him. Instead, he turns that to an advantage.

“Here are certain environmental issues where it is not easy to achieve a broad consensus,” he writes. “Here I would state once more that the Church does not presume to settle scientific questions or to replace politics. But I am concerned to encourage an honest and open debate so that particular interests or ideologies will not prejudice the common good.”

Francis is also not afraid to call out the powerful and hold them to account. While he does not directly address specific countries and their role in pollution or destruction of resources, his generalities are pointed. Developed countries, he writes, ought to help “by significantly limiting their consumption of non-renewable energy and by assisting poorer countries to support policies and programmes of sustainable development.”

He even hints that the United States has more moral responsibility because of its global wealth and power. “We must continue to be aware that, regarding climate change, there are differentiated responsibilities,” he writes. “As the United States bishops have said, greater attention must be given to ‘the needs of the poor, the weak and the vulnerable, in a debate often dominated by more powerful interests.’”

All of this is an open attempt to model the leadership he wants from other governmental and business leaders. Francis is speaking from experience. If anyone knows the challenges of changing entrenched bureaucratic systems, it would be Francis, who is now two years into life in the Roman Curia after a lifetime in the slums of Buenos Aires. “To take up these responsibilities and the costs they entail, politicians will inevitably clash with the mindset of short-term gain and results which dominates present-day economics and politics,” Francis writes in Laudato Si’. “But if they are courageous, they will attest to their God-given dignity and leave behind a testimony of selfless responsibility. A healthy politics is sorely needed, capable of reforming and coordinating institutions, promoting best practices and overcoming undue pressure and bureaucratic inertia.”

The encyclical is a clear signpost that confirms the direction of the Francis papacy. It is a one that leads from the margins, requires response and hopes for something better for all people. Against overwhelming odds, Francis chooses hope.

“All is not lost,” he writes. “Human beings, while capable of the worst, are also capable of rising above themselves, choosing again what is good, and making a new start, despite their mental and social conditioning. We are able to take an honest look at ourselves, to acknowledge our deep dissatisfaction, and to embark on new paths to authentic freedom.”

He adds, “No system can completely suppress our openness to what is good, true and beautiful, or our God-given ability to respond to his grace at work deep in our hearts. I appeal to everyone throughout the world not to forget this dignity which is ours. No one has the right to take it from us.” 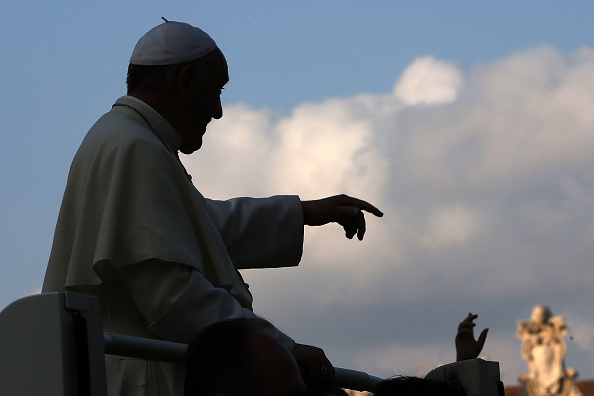