Pro-democracy lawmaker Charles Mok is surrounded by veto signs during his speech at the Legislative Council meeting in Hong Kong on June 18, 2015
Bobby Yip—Reuters
By Alissa Greenberg / Hong Kong

A controversial proposal to allow Hong Kong citizens to directly elect the city’s political leader but only from a list of up to three candidates already screened by Beijing was voted down Thursday after 10 hours of debate.

Only eight lawmakers voted in support of the proposal after pro-democracy activists and politicians deemed it a betrayal on an earlier promise to grant the Chinese Special Administrative Region “universal suffrage.” A minimum of 47 of the 70 lawmakers were needed to vote in favor of the proposal.

Anticipating defeat, members of the pro-Beijing camp staged a surprise walkout, though due to an apparent miscommunication, it lacked the numbers to remove the necessary quorum of 30 lawmakers. In the end, 37 votes were counted.

On the mainland, state-backed media blamed the defeat on “radicals.”

Opposition to the proposal prompted hundreds of thousands to take to the streets late last year for a civil-disobedience movement that became known as the Umbrella Revolution. Large swaths of this freewheeling financial hub were paralyzed for almost three months.

As a result of the proposal’s defeat, the existing method of electing the chief executive from an electoral college of 1,200 mainly pro-Beijing representatives should now remain in place for the next ballot, slated for 2017.

The defeated proposal, which supporters characterized as a significant step toward long-promised democracy and opponents call a false approximation of free elections, spurred debate from both sides lasting from Wednesday into Thursday. Following council protocol, each representative was allowed 15 minutes to make a statement, with arguments seeming to boil down to optimism vs. skepticism. Proponents said the reforms would be a first step in a longer process of democratization, while the opposition said they would instead lead to political stagnation and increased mainland involvement in Hong Kong politics.

Legislators Fernando Cheung and Lam Cheuk-ting both said Tuesday that they would vote against the proposal. “This is not a genuine free choice,” Cheung told TIME. Lam agreed, calling the reforms a screening system for the opposition and saying they are “totally unacceptable” as well as “ridiculous and shameful.” Both lawmakers expressed concern that passing the reforms would provide the central government with plausible deniability in the promised movement toward democracy and prevent any further measures toward what they see as truly free elections.

But lawmaker Regina Ip told TIME on Wednesday she would urge her colleagues to vote in favor of the reform bill. “This is a giant step forward” for democracy, she said. “Universal suffrage is by definition a universal right to vote, and Beijing is giving us just that.”

Outside the legislative complex, in a large square divided carefully by a barrier, protesters from both sides gathered to show support for their respective causes. An organization called Citizens Against Pseudo-Universal Suffrage had organized successive evenings of discussion with intellectuals and activists in the run-up to the vote, while next door groups like the Hong Kong United Youth Association, many of whom sported matching hats and shirts, chanted slogans in support of the central government.

“The key is about law and order in Hong Kong. It has been degenerating for a few years because of a small minority in town holding a different opinion,” Gary Sum, who works in the banking sector, told TIME outside the legislative complex on Wednesday as around him people waved Chinese flags and sang traditional songs. “We should have more respect for China because we are part of the sovereign state.”

On the other side of the square, at the competing antireform rally, Edmund Choi expressed incredulity at the opinions across the barrier, saying that such reforms would not do real good for the city. “I don’t know why they come here, because if they love Hong Kong what they should do is agree with us,” he said.

Hong Kong police cited rumors that some protesters might storm the chamber during or after the vote as the cause of an increase in security at the complex, including 200 police in the chamber itself and more than 1,000 outside the complex, the South China Morning Post reported Wednesday. Tensions were running especially high after the arrest of 10 individuals in an alleged bomb plot on Monday, and Twitter users posted photos of police searching the bags of passengers in Admiralty, a nearby subway station, but no such actions ultimately took place.

In addition, Cheung and Lam said that general security had been increased the week before the vote, including a curtailed number of assistants allowed to travel with each representative. Lam, who found such security to be unnecessary, called it a “humiliation” for the assistants, some of whom have worked in the building for decades. “It’s unreasonable and disproportionate,” he said.

Although polls showed a nearly even split within Hong Kong on the matter, the reforms were ultimately voted down in a dramatic scene involving pro-reform representatives calling for a recess and then leaving without a vote.

Cheung saw the no vote as a larger statement about the limits of mainland power. “The next move is to look at how civil society can gather our momentum again,” he said. “It’s a historic vote that signifies Hong Kong being able to say no to Beijing: that even as strong, as controlling, as economically, politically, militarily dominating as China is, we as a city are able to stand up and say no.” 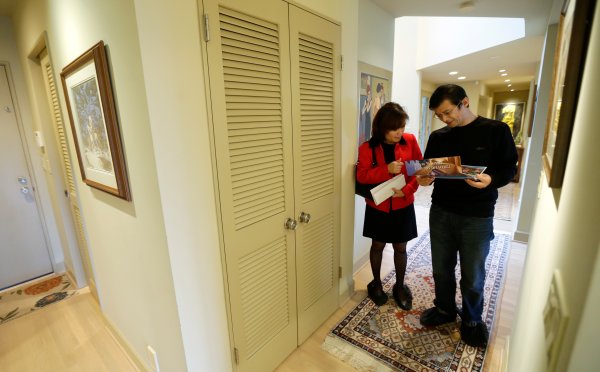 Who Wants a Dream American Home? The Chinese, Of Course
Next Up: Editor's Pick