Police officers stand around a man, suspected of a bomb-making plot ahead of an electoral reform vote, as he is brought to an abandoned former Asia Television Limited (ATV) studio for investigation in Hong Kong, China June 16, 2015
Tyrone Siu—REUTERS
By Joanna Plucinska

Five of the 10 people arrested in what Hong Kong authorities say is a separatist bomb plot were denied bail Wednesday.

If convicted, the suspects face up to 20 years in prison for manufacturing or conspiring to manufacture explosives. They were arrested on Sunday after police discovered what they described as chemicals for the making of bombs in an abandoned TV studio lot on the outskirts of Hong Kong.

Hong Kong police have suggested that the suspects were a separatist cell intent on launching bomb attacks on targets in the city’s downtown areas. However, many in Hong Kong’s democratic movement believe the plot to be a fabrication and a smear campaign against those demanding greater political freedoms for the territory.

The group’s court appearance came on the same day that lawmakers debated political reforms that sparked protests this weekend and during last fall’s Umbrella Revolution. Under discussion is a bill would allow voters to directly elect Hong Kong’s leader, known as the chief executive, but only from a pool of candidates screened by Beijing and a 1,200-member election committee comprising mostly establishment figures. The bill is not expected to pass.

Court has been adjourned until the middle of July pending analysis of chemicals and other items seized at the site.

According to the Post, four more of those arrested were released on bail yesterday and have yet to be charged. They were told to report back to police in mid-July as investigations continue. 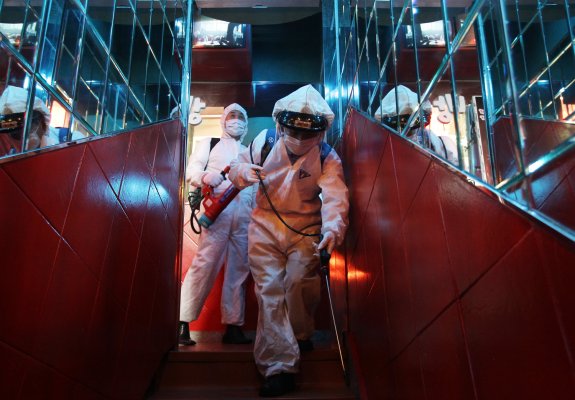 Here's the Good News if You Get MERS in South Korea
Next Up: Editor's Pick