Want your child to learn how to use a grenade launcher? Now, they can at Putin’s “Patriot Park,” a sort of Disneyland built to showcase Russian military prowess.

Attractions include military rations for lunch and tanks and missiles to play with, the Guardian reports.

The park opened on Tuesday in Kubinka, about an hour outside of Moscow. The opening comes at a time of increased patriotism and militarization in Russia, in the year following Russia’s invasion of Ukraine, the Guardian says.

To kick off, Putin organized “Army 2015,” a military showcase for arms dealers and defense contractors. Delegations from all around the world came to “Patriot Park” to buy and sell military gear.

But he’s not just targeting the arms industry, according to the Guardian. At the opening ceremony, Putin said the park is “an important element in our system of military-patriotic work with young people.” He also announced that the Russian government has added 40 new intercontinental missiles to its nuclear repository.

In the months to come, visitors will be able to watch military reenactments of famous Russian and Soviet battles and observe the latest in Russian defense technology. At full capacity, the park will accommodate tens of thousands of visitors, the Guardian reports. 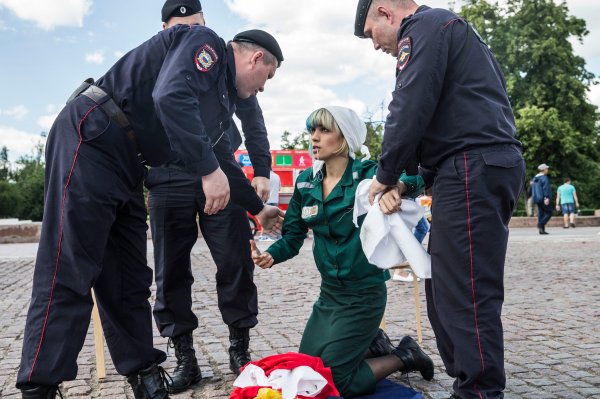 Pussy Riot Member Briefly Detained in Russia Over Protest
Next Up: Editor's Pick