Joe Paterno Will Be Inducted Into Pennsylvania Sports Hall of Fame

Joe Paterno, the late Penn State football coach whose legacy was tarnished by a child sex abuse scandal involving a team colleague, will be inducted into the Pennsylvania Sports Hall of Fame.

The ceremony will take place in October, the university announced on Tuesday. Paterno led the Nittany Lion football program for 46 years—after 16 years as an assistant coach—and holds a NCAA Division I-record of 409 victories. He also helped produce dozens of nationally recognized scholar-athletes, eventually achieving an 87% NCAA graduation success rate in the year before his passing due to cancer on Jan. 22, 2012.

The coaching legend’s career ended in November 2011 after former Penn State assistant football coach Jerry Sandusky was arrested and charged with 52 counts of child sex abuse. Paterno was dismissed by university officials on grounds that he had allegedly failed to act after being alerted to Sandusky’s actions in 2002. Following Paterno’s death in early 2012, an independent report by former FBI director Louis Freeh showed that Paterno had concealed facts relating to Sandusky’s crimes. (Paterno’s family and lawyers have challenged the findings.) 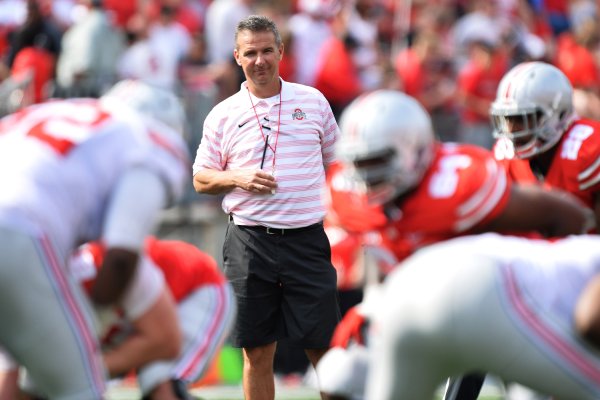 Buckeyes' Coach Urban Meyer Does Not Like It When Someone Takes His Parking Spot
Next Up: Editor's Pick