Rachel Dolezal, the 37-year-old former NAACP official under intense scrutiny for apparently faking black ethnicity, is the target of a damning indictment from her adopted brother Ezra, who is of African-American ethnicity. He called her actions “insulting” and said they were tantamount to “blackface.”

Speaking to CNN soon after his sister resigned as president of the NAACP’s Spokane chapter, Ezra Dolezal claimed she lacked honesty.

“I think she has an integrity issue,” he said. “Being in a position of authority, integrity is very important, being honest is important.”

Dolezal’s parents, whom she distanced herself from a few years ago and who have said that her ethnic heritage was primarily European, also appeared on CNN, expressing confusion and speculating over why she may have chosen to assume a black identity for over three years.

“I’m not professionally trained so I can’t really say, but many of the things she’s done are not rational and a normal, sane person wouldn’t take the approach she’s taken,” her father Lawrence Dolezal told CNN. “It’s a baffling thing until she explains it.”

Dolezal is expected to break her silence regarding the controversy around her racial identity on Tuesday, with NBC News announcing that she would be giving multiple television interviews. 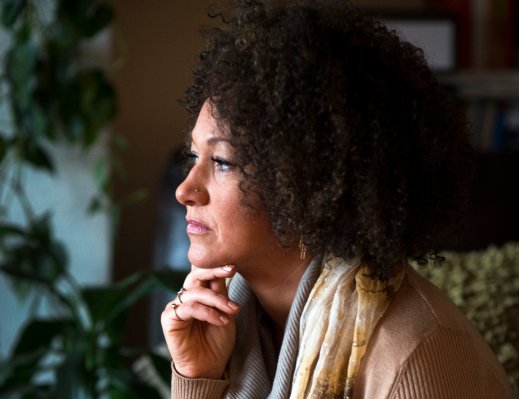 Mother of Rachel Dolezal: 'She Is Very Good at Doing Her Makeup'
Next Up: Editor's Pick