Guests arrived at the community college to a soundtrack that included rapper Pitbull. The pregame show included the national anthem sung by salsa legend Willy Chirino and, before that, songs in Spanish from his daughters. Those who spoke ahead of the candidate lauded his work to combat domestic violence and to help those who rely on social-safety programs. The greying former governor slipped passages of perfect Spanish into his speech and promised a comprehensive overhaul of the nation’s broken immigration system. His Mexican-born wife watched him with a cautious smile.

Welcome to Jeb Bush’s version of the Grand Old Party, one that he hopes can woo female and minority voters away from their historic home in the Democratic fold — all while defending domestic programs. As the 62-year-old Bush launched his White House campaign on Monday near Miami, it was clear his campaign was taking seriously its goal of expanding the appeal of a party that has shifted further and further rightward.

“I will campaign as I would serve, going everywhere, speaking to everyone, keeping my word, facing the issues without flinching and staying true to what I believe,” Bush said at a kickoff event that was stage-managed with a finesse typically reserved for incumbent Presidents. It perhaps came naturally to a candidate who is the son of one President and brother to another.

“I will take nothing and no one for granted,” Bush continued, anticipating questions over whether the country needs a third Bush as President. “I will run with heart. I will run to win.”

Left largely unsaid: the last Republican to win the White House was his brother, George W. Bush. The year was 2004.

Since then, the party has seen itself overlooked by groups that are gaining their political clout as the nation’s demographics shift. Things were so dire after Mitt Romney’s loss in 2012 that the Republican National Committee — a body chaired four decades ago by another member of the Bush clan, George H.W. Bush — commissioned a report casually referred to as “the autopsy.” Five leading operatives dug into political trends and, among other recommendations, prescribed aggressive outreach to minority and female voters, as well as softened rhetoric on immigration.

One of that landmark report’s five authors was Sally Bradshaw, a longtime Jeb Bush counselor who assembled his presidential campaign in waiting. Watching Bush’s rollout, it was as though he was building it from Bradshaw’s blueprint. And, if Bush secures the GOP nomination, these early efforts at outreach could help him run against Democratic front-runner Hillary Clinton.

Of course, candidates matter. And while Bush comes from prime presidential pedigree, nothing is preordained and there are still seven long and competitive months before Iowa holds its leadoff Caucuses. Circling Bush is a stable for candidates looking to argue to very vocal conservative activists that Bush’s support for immigration reform is unacceptable and his backing of higher education standards is disqualifying. “There are two political dynasties eyeing 2016, and before conservatives try to beat Hillary, they first need to beat Bush,” said Mark Meckler, a co-founder of Tea Party Patriots.

The dynastic nature of the race is a challenge that Bush has struggled to address. During an early foreign policy speech, he flatly declared that he was his own man, not a clone of former President George W. Bush. His brother left the White House after two terms with high disapproval ratings in opinion surveys and many conservatives’ scorn. The increasingly unpopular war in Iraq cratered his poll numbers while the economic crisis that crippled the economy in 2008 sent him home to Texas with few defenders. A Wall Street bailout may have averted a global financial meltdown but the use of taxpayer dollars prompted conservative outrage and planted the seeds of the antiestablishment tea-party movement that now threatens Jeb Bush’s candidacy.

Their father, former President George H.W. Bush, is another story in the GOP. He remains a revered figure among establishment-minded Republicans with an unrivaled resume in U.S. politics: former President, Vice President, CIA director, ambassador and RNC chairman.

Neither former President was in the crowd. Former First Lady Barbara Bush sat in the front row, however, and drew wild applause from the crowd when her son introduced her.

“In this country of ours, the most improbable things can happen. Take that from a guy who met his first President on the day he was born, and his second on the day he was brought home from the hospital,” Bush said of his father and brother.

In his bid to join upper reaches of the family business, Jeb Bush first faces a raft of serious rivals from Washington-based challengers Senators Rand Paul of Kentucky, Ted Cruz of Texas and Marco Rubio of Florida. (Senator Lindsey Graham of South Carolina is trailing his Senate colleagues in fundraising and polling, but he has been making solid appearances before activists — and cable news — that could leave him in a solid understudy position should one of the marquee names stumble.)

In national polling, Bush remains in the tight cluster of contenders atop opinion surveys, but he faces serious challengers nipping at his heels, including Wisconsin Governor Scott Walker and retired neurosurgeon Ben Carson. In fundraising, he remains a formidable candidate although his advisers have signaled that he is expected to fall short of the $100 million goal some in his circle thought was possible to collect before officially launching his campaign. Bush put together a raft of highly regarded consultants and operatives, yet last week he shuffled his team and brought aboard a sharp-elbowed operative to take over as campaign manager.

Bush is running hard to steady his internal operations and to win over conservatives who still view him skeptically. “Not a one of us deserves the job by right of resume, party, seniority, family or family narrative,” Bush said in a clear jab at his rivals. “It’s nobody’s turn … It is entirely up to me to earn the nomination of my party and then to take our case all across this great and diverse nation.”

In that diversity, Bush hopes his outreach gives him an advantage. After all, he already has the soundtrack for the inauguration ready. 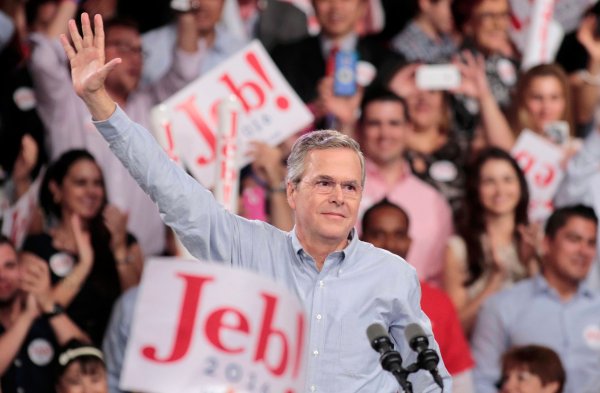 Transcript of Jeb Bush's Campaign Launch
Next Up: Editor's Pick