Here's a Look at Saturn's Most Tortured Moon

Tethys shouldn’t be alive—but it’s a lovely thing for the solar system that it is, as a recently released picture from the Cassini spacecraft makes evocatively clear. Merely one of 62 confirmed or provisional moons orbiting Saturn, Tethys is easily the one with the most compelling life story.

For one thing, it is a good sister to the other moons in the Saturnian brood. At 660 mi. (1,062 km) across, it’s the fifth largest of all of Saturn’s satellites and orbits at an altitude of 182,689 miles (294,009 km). But it does not fly alone. Its tiny siblings Telesto and Calypso—19 mi. and 16 mi. across (31 km and 26 km) respectively—fly with it, with Telesto in front Calypso in the rear, and Tethys herding them along gravitationally like a mama duck.

Orbiting lower than Tethys, at 147,572 miles (237,494 km) is the fanciful Enceladus. Squeezed by the gravity of both Saturn below and Tethys and other moons above, Enceladus emits sparkling, ice plume volcanos, which leave bright tendrils behind it and continually fall back down to dust the moon’s face. The result is a world that has been eternally battered by incoming meteorites but never shows the scars, since no sooner does one appear than it is covered up.

Tethys enjoys no such cosmetic advantages. Nearly every one of the uncounted hits it has taken in its 4-plus billion years of life is stamped in its face, giving the rocky, icy world an almost sponge-like appearance. On the moon’s eastern limb is the biggest scar of all, the crater Odysseus, which covers 18% of Tethys’s surface. On the far-larger Earth, that would be the equivalent of a crater the size of Africa.

A crack that runs nearly three-quarters of the way around the moon suggests that it almost didn’t survive the collision. Had the projectile that caused the crater been just a little bigger or moved just a little faster, it would have murdered Tethys outright. 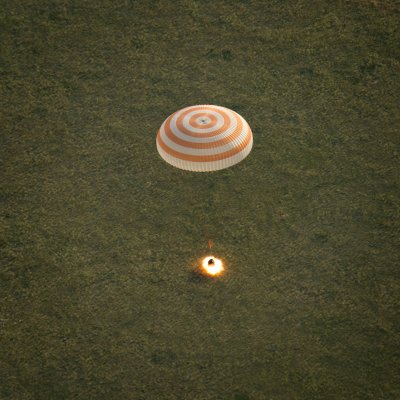 Happy Landings! Astronauts Return to Earth from Space Station
Next Up: Editor's Pick