If you like Chris Pratt in Jurassic World—judging by its early box office success, you probably do—then get ready for a lot more dinosaurs.

When Entertainment Weekly asked Pratt if he signed on for a sequel, the actor answered, “I am. They have me for I think 38 movies or something.” That interview was the second of two the actor did with the magazine, one on the set of the film during production and another 10 months later.

Pratt also spoke about his childhood love for the franchise, how director Colin Trevorrow pitched him on the project and what sets this movie apart from its predecessors.

“When we pick up on our movie, it’s not this exciting park that no one can believe,” he said. “I just liked the idea that the park is open and also attendance is falling off. In this world, dinosaurs have been around for 20 years. So no one thinks they’re fascinating anymore. Kids are bored with them. Instead of being mesmerized by a T. rex, they’re at the park and they’re looking at their iPhones.” 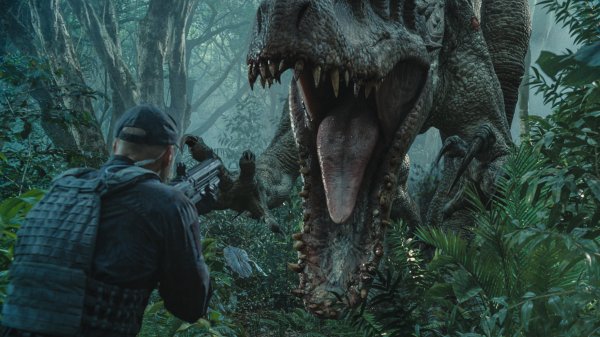 Jurassic World Has Third Biggest Opening Day of All Time
Next Up: Editor's Pick